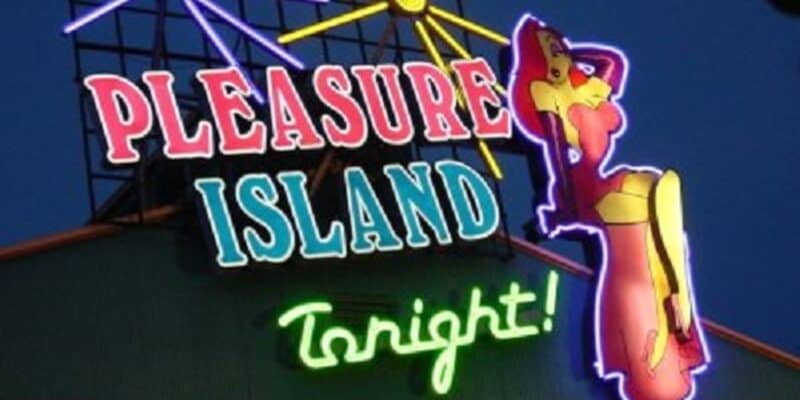 The Disney Parks might be more associated with families and children, but that doesn’t mean the grownups can’t have their fun when the tots go to bed. While Disney Springs and Downtown Disney are the current places for food, shopping, and live entertainment at the Walt Disney World Resort, Disney once had a collection of nightclubs and more known as “Pleasure Island.”

Bars, nightclubs, and evenings spent partying might not sound like the Disney Parks image now, but the ’90s were a different time and a distinctly different Disney Park experience. Before Disney Springs, there was Pleasure Island, Disney’s late-night hot spot for drinking, dancing, dining, and more. Pleasure Island was a far cry from the shopping and dining venues the Springs offers today, as it distinctly and purposefully catered to a more adult clientele.

Described by Defunctland as “a collection of nightclubs in Disney’s shopping center” at Lake Buena Vista, Pleasure Island opened in 1989 along with Disney’s MGM studios, beginning a period of more adult-oriented entertainment options for Guests staying at the Disney Parks. Designed and given its own mythos by a new generation of Imagineers, the area was a paradise for Guests wanting a little something more outside of the Disney Parks. Pleasure Island became the venue for many successful clubs such as the now-defunct Neon Armadillo which had an age limit of 17+, as well as the place where many famous musical acts from Johnny Cash to Duran Duran performed. Perhaps most famous for its yearly New Years Eve fireworks, Pleasure Island was indeed a piece of Disney magic almost exclusively for adults.

Although the attraction closed its gates officially in 2008 after becoming part of the Downtown Disney experience, there are a few remnants form Pleasure Island’s heyday still lingering amongst the shops at Disney Springs. Paradiso 37 and Raglan Road are two original restaurants that continue to be popular hotspots for both dining and entertainment. Those who had the opportunity to experience the collection of nightclubs during the island’s operating years can still find a few remnants of its original structure at the Landing in Disney Springs, but Disney has certainly moved on from its swinging nightclub years.

Related: How the Internet Turned on “Disney Adults”

With Disney Adults and grown-up audiences being a popular talking point on social media nowadays, perhaps Disney will learn from their partying past and resurrect some more adult-oriented entertainment outside of a shopping district. There was a very vocal and present audience for Pleasure Island, and the argument can certainly be made that the desires for more Disney nightlife haven’t changed.

Have you been to Pleasure Island? Would you go again? Tell us in the comments below!