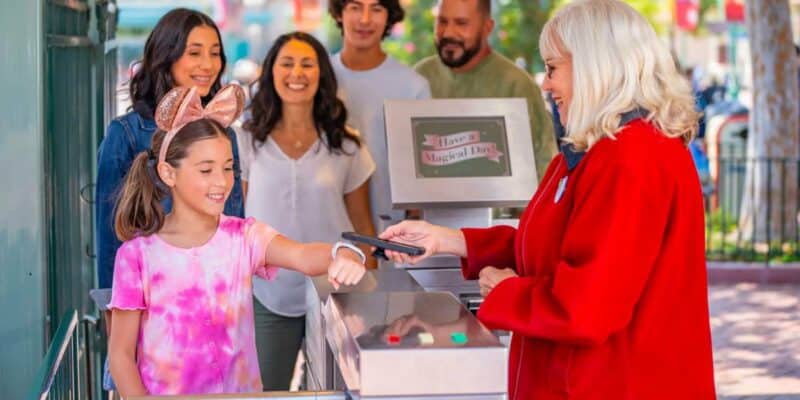 MagicBand+ Service debuted at Disneyland Resort on Wednesday after years of successful implementation at Walt Disney World Resort. Sadly, many Guests are already disappointed with the product.

At Walt Disney World Resort, Guests can tap their MagicBands on Mickey Mouse-shaped touch points to enter the Disney Parks or use Lightning Lanes. These touch points also feature a fingerprint scanner at Park Entry.

However, Disneyland Resort didn’t install such touch points. Instead, Cast Members use a mobile device to scan each Guest’s MagicBand. Many fans feel this makes the MagicBand+ rollout seem rushed and cheap.

On Reddit, u/gferi001 wrote that they were “a little disappointed” that Disneyland Resort didn’t install touch points at Disney California Adventure and Disneyland Park. Many fans showed agreement by upvoting the post.

“I figured they would be installing those at DLR rather than scanning the bands via a phone. That’s disappointing for sure,” u/Phased5ek replied. “Hopefully they’ll add the other readers later and they’re just behind schedule on launching the service. (I’m going next week and was all excited for the gate readers… alas!)”

“That requires money, so probably not,” u/Ohnomypants1234 joked.

Guests can enter the Disney Parks, check into Lightning Lane/Genie+ reservations, and participate in interactive Star Wars and Avengers Campus games with their MagicBands+ at Disneyland Park and Disney California Adventure.

Your MagicBand+ will also glow with color and pulse with vibrations during Fantasmic!, World of Color, and other select nighttime shows. Time will tell what other magical features are coming to MagicBands+ at Disneyland Resort!

Have you tried out MagicBand+ at Disneyland Resort?