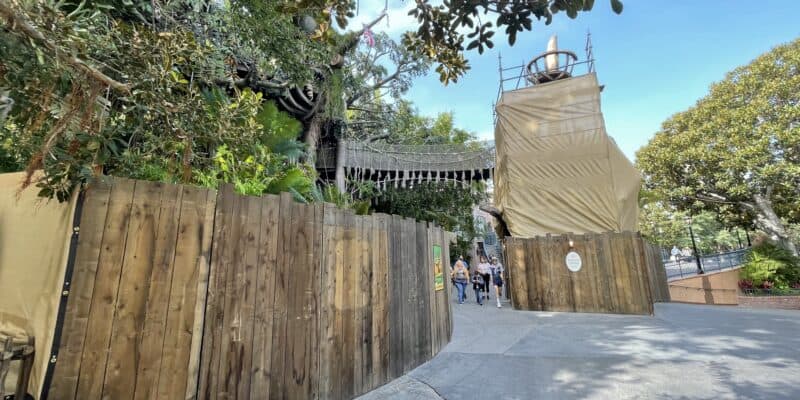 One cool aspect about visiting any of the Disney Parks or Resorts is how things are constantly changing. You may visit one year and ride an attraction and come back later to find out it’s been completely rethemed. Disney Imagineering is always working on new projects in order to keep things fresh and current.

Of course, we would hate to see some of our favorite classic attractions go away, but we appreciate how there’s always something new to look forward to.

Tarzan’s Treehouse is a great example of this. The attraction has been undergoing construction since September 2021, which is a longer timeframe than regular or seasonal refurbishments. Over the last months, we have seen parts of the attraction be completely dismantled and destroyed as a part of a major retheming project.

Tarzan’s Treehouse opened in 1999 to Disney Guests as a walk-through attraction which showcases the story of Tarzan with treehouse rooms that closely resembles those from salvaged parts from a shipwreck, according to the Disneyland attraction’s backstory.

Before the attraction was Tarzan’s Treehouse, it was known as Swiss Family Treehouse, which opened to Disney guests in 1962, and featured concrete roots, steel limbs, and 300,000 leaves.

We’ve given updates on this experience in the past, and a new photo was shared recently that gave us a closer look at the project. You can check it out in the tweet linked below:

@FrshBakedDisney scrim is down on Tarzan again and actively working on the top scadfolding pic.twitter.com/LNt7H7d2B6

The picture shows that the scrim has been pulled down from the attraction, revealing some scaffolding. As much as we wished there was a clue as to what was going on, it’s hard to tell anything from this photo. Disney has been curiously quiet regarding this project, and we still do not know exactly what is taking over the original treehouse.

Many Guests theorized an Enctanco makeover was happening after the huge success of that film.

What do you think will replace this classic Disneyland attraction?