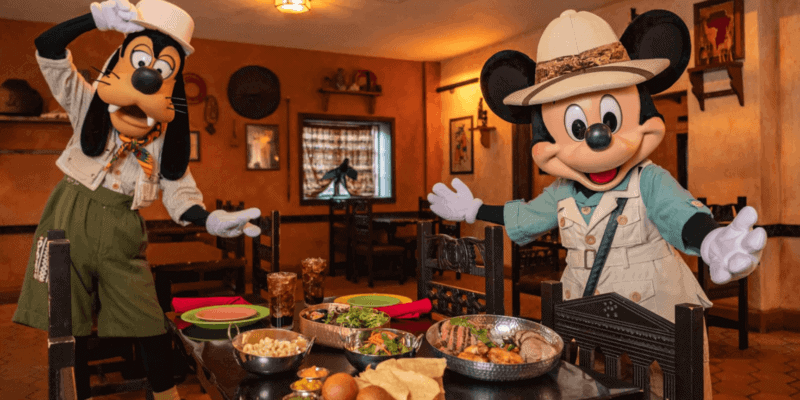 Inside the Magic recently reported that the beloved EPCOT restaurant Akershus Royal Banquet Hall would be returning to the Disney Park later this year, but that’s not the only development to share about Disney World restaurants.

Disney announced that beginning November 1, Tusker House Restaurant will be transitioning to an all-you-care-to-enjoy, buffet style dining experience! That means you can go and grab all the food you can handle. What makes this spot nestled in the Harambe Marketplace so special is its menu filled with African-inspired flavors.

There are plenty of dishes to keep your eye (and taste buds) on when this location goes back to a buffet. From breakfast to dinner, you will be more than satisfied. Kickstart your morning at Disney’s Animal Kingdom Theme Park with tasty plates, including an assortment of pastries like the Zebra Coffee Cake, breakfast classics like Simba Waffles and Mickey Waffles, and a variety of breakfast meats.

For lunch and dinner, you can indulge in various breads and dips, house specialties like the Spit-roasted Tandoori Chicken and Green Curry Shrimp, plant-based options including the Cauliflower Bunny Chow, and various salads. There are also some classics for the little ones to enjoy like corn dog nuggets and macaroni and cheese to name a few. And don’t worry – there are plenty of desserts to enjoy too!

This adventurous spot not only has mouthwatering eats, but Donald Duck and some of his Disney pals have taken a break from their safari adventure to celebrate with you. Be sure to get a picture and a hug from the gang as they venture around the dining room. Plus, what could be better than characters and food?

Over at Disney’s Polynesian Village Resort, the delicious Kona Cafewill soon be returning from its recent refurbishment. Beginning November 1, you can once again dine at this favorite restaurant but now with a refreshed experience. The look, feel, and even some flavors of this relaxed café will be different, yet familiar. Kona Cafe will feature American cuisine with that Asian flare that makes it so unique and you can still watch the chefs at work in the onstage sushi kitchen.

There are breakfast favorites that have cemented their place on the menu, including the delicious and can’t-miss Tonga Toast and Pineapple Macadamia Nut Pancakes served at breakfast. These two are fan-favorites for a reason. Just take a peek at how tasty they look! Be sure to keep an eye out for several items returning to the menu like the Big Kahuna Burger and Seafood Pu Pu Platter, and even a new plant-based offering for dinner, the Sautéed Red Quinoa.

Are you excited about the changes coming to these beloved Disney World restaurants? Let us know in the comments!