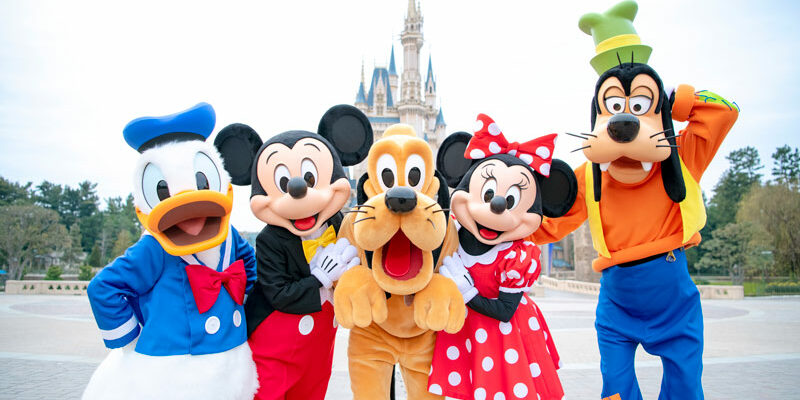 Meeting the characters at a Disney Park is almost an unavoidable tradition and they’ve been delighting Guests for years, but some are far more active than others.

Rubbing elbows with Mickey, Minnie, and all their friends is a favored pastime amongst many die-hard Disney fans, resulting in quite a few full autograph books. While it’s always wonderful to get a hug and a selfie from both face and fur characters alike, there are certainly more than a few stand-out characters who go the extra mile to ensure magical memories are made with each new visit. The character performers are some of the most highly trained Cast Members on Park Property, and their dedication to bringing these cherished faces of the big and small screens to life each day is part of what makes many Disney trips so unforgettable.

That all being said, the characters at the Disney Parks all have different personalities and behaviors to match the persona they portray. In short, Goofy won’t be as big and expressive as someone like Sadness or Eeyore and Stitch won’t be as controlled or professional as Mickey or one of the princesses. That’s not to say some characters are better than others, but there are more than a few that go the extra mile.

Any character not clad in a giant furry costume and mask is what’s known to Disney Parks fans as a “Face Character.” These are fully interactive performers who can better talk and communicate with Guests. This group of character performers includes the Disney Princesses, Captain Jack Sparrow and his pirate crew, and even a selection of Marvel super heroes just to name a few. Since they’re allowed more communication with their visitors, their interactions can be a lot more personal.

While Winnie the Pooh might be the adorable face of his franchise, his character interaction is a completely different animal compared to his striped companion. Much like his titular theme song, Tigger is bouncy, trouncy, flouncy, pouncy, fun-fun-fun-fun-fun, and he always goes the extra mile to make Guests smile. Part of his zany charm is due to Tigger’s wider range of movement, allowing him to be sillier and more physical with each visitor. Of course, it’s pretty hard not to love any of the Pooh crew.

Related:Tomorrowland: What The Future Has to Offer

Everyone’s favorite blue ball of trouble is always a highlight of any visit to Tomorrowland, and Stitch is always in the mood for a little mischief on occasion. Similar to Tigger, Stitch has the physicality and imagination to get away with more. He’ll sneak up behind guests, play with their cameras, and even pick his snout in selfies and photos. Of all the characters that live up to their on-screen personalities, Stitch is definitely one of the most accurate.

When it comes to fun Meet-and-Greets, Goofy understands the assignment. Whether he’s in Epcot’s Character Spot or Mickey’s Storybook Circus, he’s always a larger-than-life and his range of expression truly does rival that of his rodent coworkers. Any Disney fur character performer needs to be a master at non verbal communication, but Goofy’s antics are as wide and colorful as any of his cartoons.

If there’s one character interaction that has to be 100% on point, it’s Mickey Mouse. Mickey can be found across every Disney Park, regardless of location. From Disneyland and Walt Disney World to Disneyland Paris and Tokyo DisneySEA, Mickey is easily the main character most Guests come to see. Entertaining such a large quantity of visitors takes a heavy set of acting chops to maintain Mickey’s classic friendly personality, and his Meet-and-Greets are always a joy.

Who’s Your Favorite Character at the Disney Parks? Tell us in the comments below!