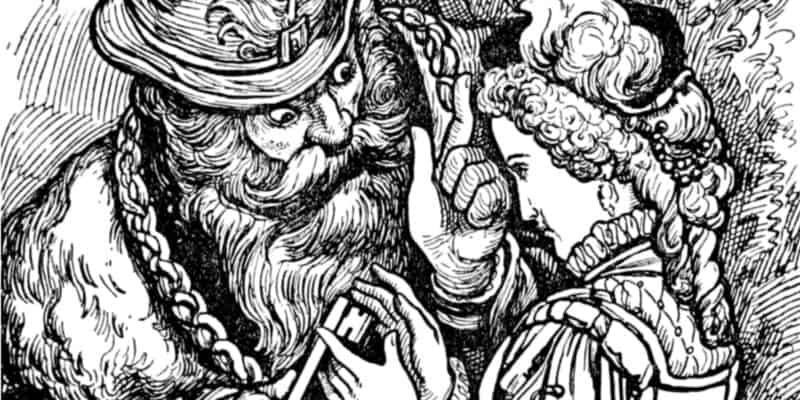 It was recently rumored that Disney will be making a return to traditional 2D animation by adapting a famous French fairytale, but it might not be the sort of story the studio is used to playing with.

Charles Perrault might not be a name many Disney fans recognize, however they might be familiar with a few of his works which include “Beauty and the Beast” and “Cinderella,” but Perrault was also famous for adapting another French folktale, one that would absolutely be the last story Disney would ever think of adapting.

A mysterious castle, a bloody chamber, a magic key, and a mysterious merchant with a massive blue beard are all the elements that bring “Bluebeard” off the page. Readers familiar with this tale of beards and brides will know that is by no means a fairytale.

The story concerns a young bride who marries the titular Bluebeard, a wealthy and successful merchant with a very obvious facial feature. He has been married several times before, but all of his previous brides disappear under mysterious circumstances, yet the two are still wed.

Shortly after the wedding, Bluebeard must go away to see to some business in another kingdom. He leaves his bride with the keys to his castle and explicit instructions that she may enter any room she wishes save for one. Naturally, her curiosity gets the better of her, she breaks the one rule her husband requested, and horror ensues.

Perrault put the story to paper in the 1600s, but the folktale itself has multiple variations and retellings. While some fans with exposure both to the works of Walt Disney Pictures and traditional fairytales might notice some similarities between “Bluebeard” and Beauty and the Beast, the original tale is far from the classic love story fans might be more familiar with. Where most fairytales concern far-off places, daring sword fights, magic spells, and princes in disguise, this story is all about the villain.

With such famous foes as Captain Hook, Scar, Hades, and Maleficent just to name a few, Disney is responsible for some of the most iconic villains in modern cinema, and a Disney version of Bluebeard might be their most ambitious antagonist to date. There’s no doubt that the titular character would absolutely outshine any leading lady he might be paired with, but that could be in his best interest.

Bluebeard has traditionally been a giant or an ogre, but he has also been depicted as a pirate, an Arabian trader with a large scimitar, and a French aristocrat. It would be very easy for an animator like Andreas Deja, the artist behind Scar and Jafar, to give this character the traditional Disney look he desperately deserves.

Related:Time Running Out For Disney World to Keep Its Promises

Is it the traditional Disney fairytale with a happy ending and chorus of singing woodland creatures? Absolutely not. However, it might be the step in a different direction that allows the 2D animated films to return to the big screen with a triumphant entry.

Would you go see a movie based on Bluebeard? Tell us in the comments below!