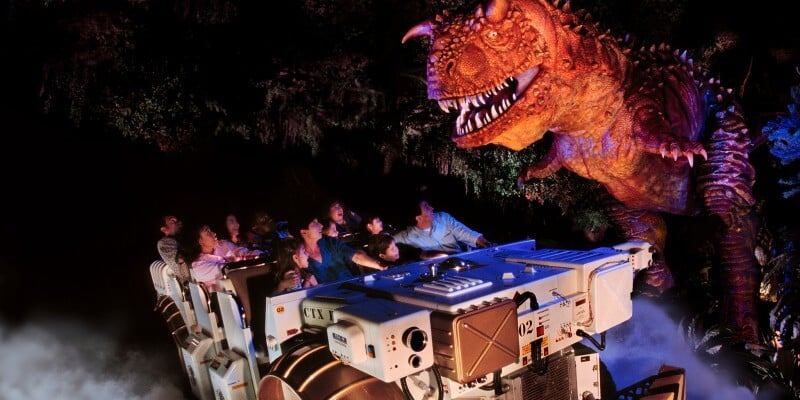 The Disney Parks are known for having some of the most famous rides and attractions in the theme park industry, and that reputation has only helped the company achieve worldwide acclaim.

However, many skeptic park-goers might be quick to roll their eyes at the idea of some rides like Small World and Frozen Ever After. However, just because the Parks are known for their family-friendly nature doesn’t mean they can’t have at least a little bit of an edge. In fact, Disney has shown that they aren’t afraid to go a little dark when they need to, especially in some of their thrill rides and attractions. While there still might be some that find the term “Disney Thrill Ride” a bit ludicrous, it’s quite surprising what can be done when Disney Imagineering is turned loose. From Disneyland to Walt Disney World and beyond, there are plenty of thrills and chills to go around.

Much like its iconic Yeti, Expedition Everest is something of a rare animal. Known as one of Disney’s “Story Coasters,” this twisting, turning, tumultuous trip up to the summit of the Forbidden Mountain relies on atmosphere and environment to get its reactions. The coaster not only sends Guests spiraling backwards down the slopes but brings them face-to-face with a legendary monster as well. Even when he’s in “Disco Mode” the Yeti is still one frightening piece of Disney Imagineering.

Shanghai Disney offers a completely different set of attractions compared to some of the American Parks, but it does feature an attraction that is something of a hybrid between Expedition Everest and Kali River Rapids from Disney’s Animal Kingdom. The river ride takes Guests through the Roaring Mountain of Apu Taku where a gigantic reptilian Guardian of the Water waits in a dripping cave, looking for trespassers to devour. The audio animatronic of the giant crocodile monster is easily one of Disney’s biggest pieces of nightmare fuel in recent years.

Anything associated with The Twilight Zone is going to be insanely creepy, and the Tower of Terror is no exception. When those doors open, so does the portal to another dimension of sound, sight, and of the mind. Before riders plummet down the infamous 130 foot drop, they encounter restless spirits of the golden age of Hollywood who call the hotel their permanent home. It’s a slow burn, but well worth the payoff.

Those expecting the Haunted Mansion earning a mention might want to take a look at the Phantom Manor of Disneyland Paris. A Horror fan’s dream come true, this dark ride has everything needed for a classic Hammer Horror production, including an appearance by the legendary Vincent Price. It’s a tale of tragedy, romance, and murder most foul as a ghostly bride’s husbands are picked off one by one by a fiendish phantom. With a murder mystery, ghost town full of zombies, and crypts full of singing skeletons, it’s certainly got more than its fair share of Happy Haunts.

Considered by many Disney Fans to be the scariest ride on property, Dinosaur takes Guests back millions of years to retrieve an iguanodon specimen before the meteor strikes the earth and ends the dinosaurs reign. Although there are plenty of docile species and herbivores like the triceratops and hadrosaur, that angry carnotarus is one nasty piece of work. Not only is it a race against the clock, but a thrilling chase from a hungry predator as well.

Did any of these Disney rides scare you? Tell us in the comments below!

Comments Off on Disney Park Rides That Are Surprisingly Scary