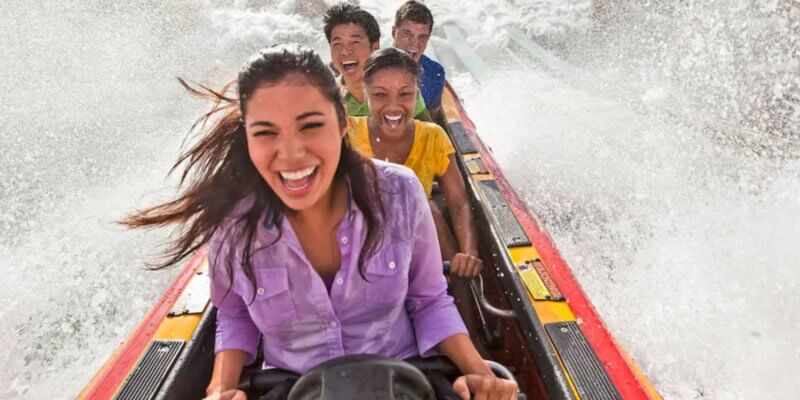 Universal Orlando Resort suffered some damage at the hands of Hurricane Ian.

Photos surfaced of a giant gaping hole in the show building of Jurassic Park River Adventure, and the lagoon in Universal’s Islands of Adventure was so high that a portion of The Incredible Hulk Coaster was submerged in water. However, Universal Team Members and construction crews worked hard to make sure that the attractions were ready to go, and both of the rides have been open since Universal Orlando reopened.

The ride, located in Toon Lagoon at Islands of Adventure, has been closed since Hurricane Ian came through Orlando.

Just recently, Universal put a sign in front of the attraction that shared it was “under seasonal maintenance.” Other than on a few occasions when people have noticed the rapids running again, they’ve largely been turned off and the attraction has remained drained most days.

In a recent social media thread, a few Universal Team Members have spoken out about what they are hearing in terms of the ride’s future.

Another Team Member who says they worked at Dudley Do-Right’s Ripsaw Falls said that the ride is not closed due to damage from the hurricane, but problems that have already existed. They also confirmed what was being heard that it could face permanent closure.

“All of us team members were sent to different rides, and told we might not open till March maybe even summer, if we open at all” the Team Member shared. “Our leads and management have told us if it costs too much to fix they might just get rid of it. Guess that’s what happens when the only thing done during yearly drys is just them repainting everything instead of fixing what needs to be fixed.”

At this time, it is important to note that these are all rumors and nothing has been confirmed by Universal Orlando.

Dudley Do-Right’s Ripsaw Falls is “Part roller coaster, part water flume.” This ride combines the fun of the classic cartoons with edge-of-your-seat action. You’ll slosh your way through twists and turns along with lovably laughable Royal Canadian Mountie, Dudley Do-Right. As you approach a nail-biting 75-foot drop, get ready to whoosh down the track for the biggest splash of your life.

Where does Dudley Do-Right’s Ripsaw Falls fall on your rankings of Universal attractions? Let us know in the comments!