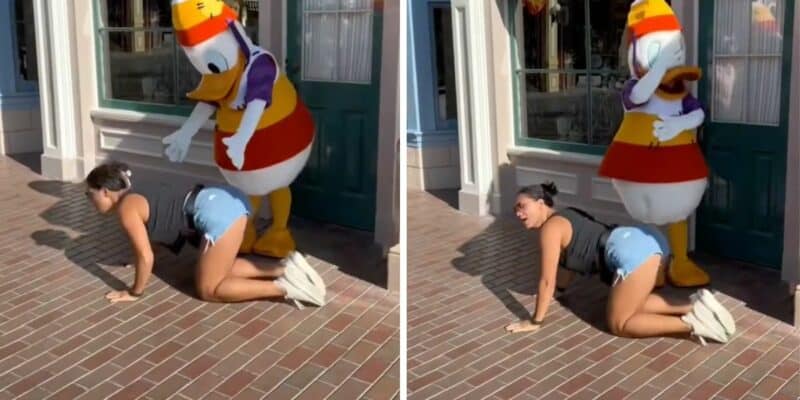 You really and truly never know what will happen when Guests interact with characters at Walt Disney World Resort or Disneyland Resort.

Seeing characters at the Disney Parks is a key element of the overall experience, and we are so glad they’re finally back. Disney announced earlier this year that character meet and greets would be returning in a distanced fashion at select locations around Magic Kingdom, Disney’s Animal Kingdom, Disney’s Hollywood Studios, and EPCOT, and we’ve begun to see more and more consistent opportunities for Guests to meet with their favorite characters at both the Parks and the Resorts.

However, sometimes Guests take a lot of liberty when interacting with these characters, either for themselves or to share online through social media.

A video went viral on TikTok recently, showing a Guest dancing in front of Donald Duck. You can see the video below:

Donald closes his eyes and turns away in a hilarious encounter that sparked a debate in the comment section. A lot of people called the Guest out for doing something like this at Disney. However, this really was a harmless encounter that did not hurt or affect other Guests.

An example of a Guest going too far would be a story we covered earlier this year involving a Guest dancing without pants on. They were visiting Disney Springs and decided to film a video where they lay on the ground while wearing just a shirt and a bikini bottom. This video sparked a massive discussion about what kind of activities should be banned from the Disney Resort.