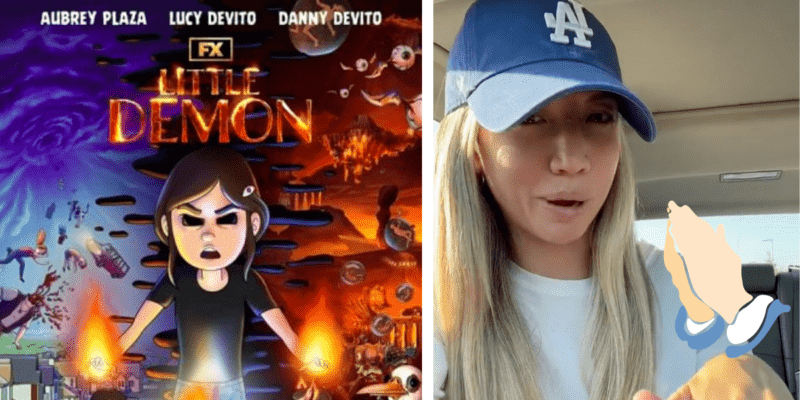 The FX show, also available on Hulu, premiered on August 25. The Hollywood Reporter called the animated series “promising.” Little Demon currently boasts a 6.8/10 on IMDB and 82% on Rotten Tomatoes.

However, not all audiences are excited about Little Demon. Many Christians are upset that a Disney-owned animated series would explore a demonic topic. Jess (@jessicalieurance) on TikTok started a discussion amongst fellow Christians about the show:

Jess explains that she used to post Disney content exclusively but that she’s elected to pull back a bit after watching an interview with the cast of Little Demon. She notes there were other things Disney has done that she disapproves of but doesn’t elaborate.

“During an interview, no joke, they said they are enjoying normalizing paganism,” Jess said, referencing a San Diego Comic-Con appearance by Aubrey Plaza. “Even if you’re not a Christian, I hope you can tell how wrong this is on so many levels.”

“I love that we are normalizing paganism. Laura is a pagan; she’s a witch; she’s jacked,” Plaza said in an interview last month.

Jess was troubled by this. “If we’re going to normalize this, can we normalize the fact that demons are real and Christians have the power and authority to cast them out? This isn’t some cutesy little show where they’re just like, ‘Ooh, magic!’ Like, this is pretty blatant,” she said.

In the video, Jess says Walt Disney purposefully kept the Bible out of Disneyland Park, despite his religious beliefs, because he wanted to promote unity. Disney was a lifelong Christian but didn’t attend church. He said he wanted everyone to feel welcome at Disneyland Resort and when watching his cartoons, but we could not find confirmation that he wanted to include “Bible rides” at Disneyland, as Jess states.

“Now, I’m not someone who boycotts. I am not totally boycotting Disney,” Jess explains. “I think it defeats the purpose if you remove any God-loving people out of a situation that needs Jesus… We need to be praying for the leaders in that company, be praying for the people making these shows, because whether you’re for this or against this, it does impact culture.”

The video received hundreds of supportive comments. “No way will that be watched in my home. I am a big Disney fan but they are off kilter in their business model,” @heidi.gibson86 wrote.

“I am in disbelief that Disney is pushing content like this. Shows how bad our society needs Jesus and his word,” @torreyann said. “I definitely agree w/you on not Boycotting Disney. I will continue to be intentional on what I watch, and listen to. Staying away from content such as this show.”

“This is infuriating,” @cristina.m.fuentes wrote. “More & more things are normalizing these types of things and it’s so frustrating as a parent to have to VET everything before!”

This isn’t the first time Christians have taken issue with The Walt Disney Company. Some said demonic elements in the Disney Channel animated series Owl House “crossed the line.” Many boycotted after CEO Bob Chapek announced that Disney was against Florida’s controversial Parental Rights in Education Act – also known as the “Don’t Say Gay” law.

It’s important to note that while Little Demon is animated, it received a TV-MA rating and is intended for adult audiences.

From creators Darcy Fowler, Seth Kirschner, and Kieran Valla, Little Demon airs every Thursday on FX and is available for streaming on Hulu.

Do you think Little Demon is inappropriate?