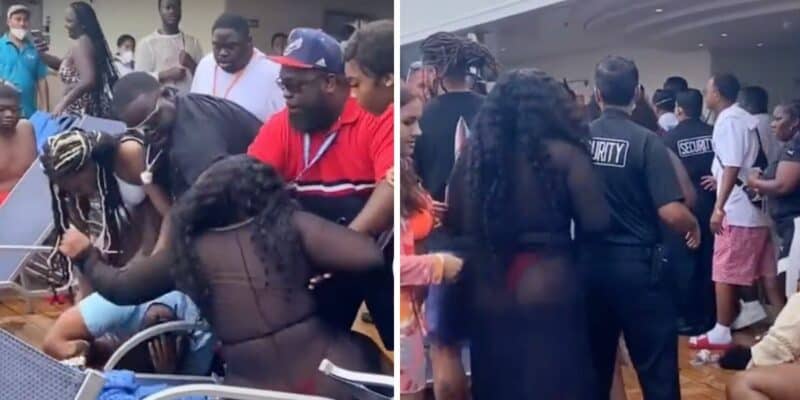 Earlier this month, a massive fight broke out between multiple Guests on a Carnival Sunrise cruise.

A considerable amount of people all engaged in the intense brawl, smacking, punching, and hitting each either in the process. Multiple videos spread across all forms of social media, including in a tweet which you can see below:

Brawl on Carnival cruise ship. Fight was over a lounge chair.

Brawl on Carnival cruise ship. Fight was over a lounge chair. pic.twitter.com/wksyHc6Qr4

As reported by The Orlando Sentinel, one passenger commented on one of the videos and claimed that up to 30 people got involved in the fight. “All I know is, I was filling my cup up with lemonade then, boom, they were knuckin’ and buckin’! Whew, you just had to be there,” another TikTok user commented.

In one of the videos, a woman off camera shouts, “That’s a b-tch-as- move.” A man wearing a lanyard who appears to be an employee attempts to tone down the violence but is eventually overwhelmed.

Several passengers started to record the fight as it went on, meaning there were multiple accounts of the incident. Another tweet showing a new angle is linked down below:

A fight between cruise passengers sailing on the Carnival Sunrise is caught on camera pic.twitter.com/DUyNSKci2J

The various videos show a large group of individuals beating on one another as people scream and try to intervene. A whistle can be heard in the background as the fight goes on. Some claimed the fight started because of an argument about a deck chair, but we cannot confirm this is the reason the fight broke out.

The Sunrise was on the tail end of a five-day, round-trip cruise in the Western Caribbean.

It’s unclear if any arrests were made or if anyone involved was injured.

This is a developing story, we will update our article as more information comes out.