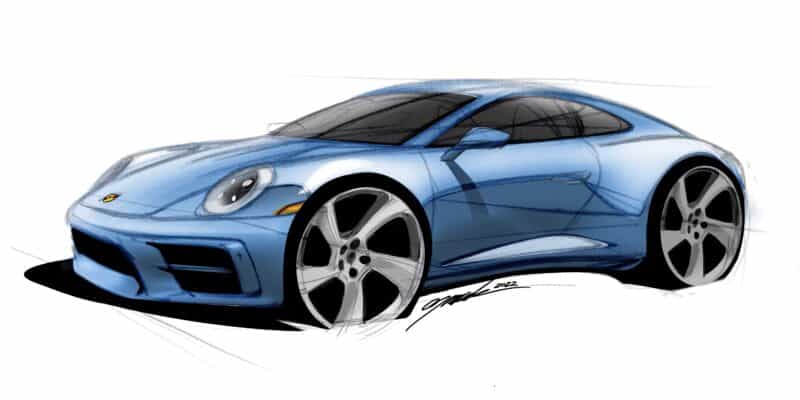 Calling all Cars (2006) enthusiasts! Porsche and Pixar recently collaborated on a project that gives fans a rare opportunity to bid on their very own 911 “Sally Special” at a charity auction set to take place on August 20.

This Pixar-inspired, authentic model will be the only one of its kind that the companies will create, and the specifications are stunning. The project simultaneously channels Cars character Sally Carrera’s signature aesthetic, as well as her on-screen passion for giving back to the community.

“This car is special, and whoever has this car will have something unique that will probably never happen again,” Pixar Animation Studios Creative Director of Franchise Jay Ward said in the above Porsche Newsroom video.

Released in June of 2006, the Cars official film description reads:

“Hotshot rookie race car Lightning McQueen is living life in the fast lane until he hits a detour on his way to the most important race of his life. Stranded in Radiator Springs, a forgotten town on the old Route 66, he meets Sally, Mater, Doc Hudson, and a variety of quirky characters who help him discover that there’s more to life than trophies and fame.”

In the film, Lightning McQueen’s friend Sally Carrera is a 2002 Porsche Carrera who serves as Radiator Springs’ attorney and runs the town’s Cozy Cone Motel. Despite the ability to reach speeds of up 177 mph, it’s the slow-lane, small-town life that she works hard to preserve.

Voiced by Award Winning Actress Bonnie Hunt, Sally’s life lessons in the hit film, as seen below, are as notoriously beautiful as her baby blue exterior.

20 years later, a small group of Pixar Animation Studios professionals teamed up with Porsche executives to bring Sally to life with incredible attention to detail that took months to plan and execute, according to a recent publication in Porsche’s newsroom.

Among those collaborating on this first and only street-legal Sally-inspired Porsche 911 are Cars Production Designer Bob Pauley and Creative Director Jay Ward, as seen in the video above, who had the following to say about the project.

“We wanted to help, somehow, and as a team we realized we could perhaps harness what we were working on to raise money. The whole project began with the premise that Sally’s character was devoted to helping others and it seems right that this should continue 20 years on.

Only one will ever be made. It will be auctioned with all proceeds specifically aimed to help children, supporting education programs for young girls in the U.S. through Girls Inc. and refugee families fleeing Ukraine, predominately women and children.”

President and CEO of Porsche Cars North America Kjell Gruner called the collaboration “special and meaningful,” both as a Porsche lover and as a father whose daughters grew up watching Sally on the big screen.

“Translating the spirit of Sally into a new 911 has been fascinating – this time the sports car is intended for our world, and to be driven and enjoyed – it will have a windscreen you can see out of and shares its panels with the 911 we know and love,” Gruner told Porsche’s newsroom. “But, like Sally, its purpose is to help others – and that makes it extra special.”

Let’s take a closer look at Porsche’s newest, one-of-a-kind “911 Sally Special” before it hits the auction this weekend.

Early sketches of the exclusive Porsche 911 show the areas in which designers hoped to infuse the animated Sally into the real-life street model. Below are a few examples of the amazing ways in which they were able to bring these sketches to life, honoring the character while remaining true to a standard of luxury that Porsche owners have come to expect.

From the sleek exterior and the innovative interior, down to the intricate stitching and the tailored key fob, the vehicle contains custom blue accents using a color named specifically for the character. The “Sally Blue Metallic” hue beautifully incorporates Sally’s signature look.

The team also incorporated small “Sally Special” logos complete with a subtle Sally portrait into various parts of the design, as well as the ever recognizable Cars logo.

Porsche’s “Drive Mode,” which gives drivers the capability to maximize engine responsiveness through various settings right from the steering wheel, has been renamed to “Kachow! Mode,” an ode to Lightning McQueen’s catchphrase.

Sally Carrera’s infamous pinstripe tattoo even made its way into the final product.

The following are also included in the auction listing as accompaniments for the highest bidder, who will not only own a piece of Porsche and Pixar history but will also take home:

With a long list of impressive and personalized features, including but not limited to those listed above, Porsche’s 911 “Sally Special” is nothing short of a masterpiece.

For a chance to own this rare collectible car, interested buyers can register to bid on RM Sotheby’s website. The 2022 Porsche 911 ‘Sally Special’ will be offered on Saturday, August 20, at the Monterey Auction, a premier event that takes place during Monterey Car Week in California.

100% of the proceeds benefit Girls Inc. and USA for UNHCR, the UN Refugee Agency.

What do you think of this epic Porsche/Pixar collaboration? Tell us in the comments below.