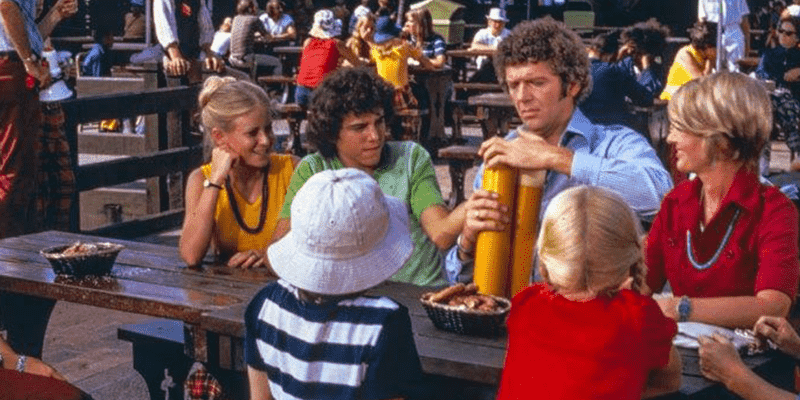 This is a story.

There aren’t many television shows that transcend time and become known as a pop-culture icon, but that’s precisely what The Brady Bunch did. The popular show with a catchy theme song that can be recognized by almost anyone aired from September 26, 1969, to March 8, 1974, on ABC.

The show was conceived by Sherwood Schwartz (creator of Gilligan’s Island, which aired 1964–67) and revolved around the life of a large complex blended family, which comes together when Mike Brady (played by Robert Reed), the father of three sons, marries Carol Martin (Florence Henderson), the mother of three girls. They combine their households in a four-bedroom house in an unnamed suburb of Los Angeles. The main cast included the Brady boys, Greg (Barry Williams), Peter (Christopher Knight), and Bobby (Mike Lookinland); the girls, Marcia (Maureen McCormick), Jan (Eve Plumb), and Cindy (Susan Olsen); and Alice Nelson (Ann B. Davis), the wisecracking live-in housekeeper.

However, what you may not know is that there was a time when a popular theme park was taken over by The Brady Bunch for the filming of an episode.

The episode in question, Episode No. 106 — “The Cincinnati Kids” — was filmed at Kings Island, located in Mason, Ohio, over a five-day period from August 20 through August 24, 1973. The episode was filmed in the theme park’s second year open. The plot of the episode sees Mike taking the entire family on a trip to King’s Island amusement park, where he is to submit plans to a client, but a mix-up causes the blueprints to go missing at the theme park.

A number of rides that are long gone but not forgotten can be seen in the episode, including Halley’s Comet, Der Spinnen Keggers, and the Wheel of Fortune.

It’s pretty interesting to look back and see now, and it’s pretty cool to see some of these photos reemerge from the day there.

Have you seen this Brady Bunch episode? Let us know in the comments!