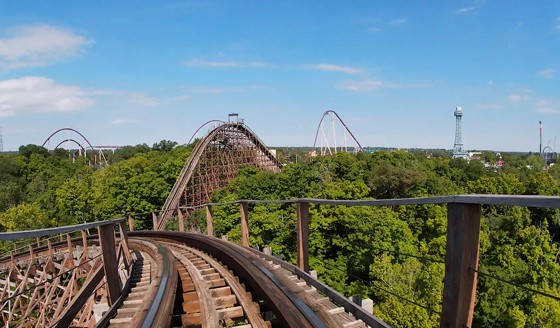 A group is facing felony charges for a crime spree that resulted in thousands of dollars of property being stolen at a popular theme park.

No matter what theme park you’re visiting, whether it be a Disney Park in Walt Disney World Resort or Disneyland Resort, or if you’re taking a trip to various theme parks around the country including Universal Orlando Resort, Universal Studios Hollywood, Six Flags, Busch Gardens, SeaWorld, Cedar Point, Lost Island Theme Park, you’re sure to have a great time.

However, for many Guests visiting the popular theme park, they came away with fewer items than they entered the amusement park with.

A trio of men are facing felony charges after allegedly stealing items from patrons’ vehicles and storage bins at rides that resulted in thousands of dollars of property going missing. Quentario Irvin Lakes Dye, 45, Lamont Johnson, 20, and Branden Benito Fantroy, 20, were each indicted Monday by a Warren County grand jury on nine counts of receiving stolen property, Journal News reports.

“It ticks me off when people go there with a plan to steal,” Warren County Prosecuter David Fornshell said. “But it does happen every year.”

The men are accused of stealing thousands of dollars worth of cash, credit cards, gift cards, cell phones and electronics from unlocked vehicles and storage bins for roller coaster riders.

The men visited Kings Island “solely to steal” according to Fornshell and were eventually caught trying to use stolen credit cards to purchase gift cards at a local Kroger.

This isn’t the first incident to occur at Kings Island this year. Guests staying at the Resort’s campground broke out in a brawl that resulted in a stabbing and subsequent arrest earlier this summer.

What do you think of this group facing charges? Let us know in the comments.