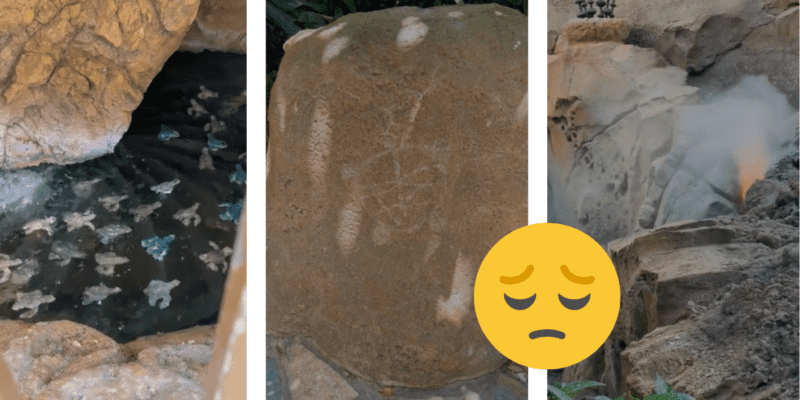 Aulani, A Disney Resort & Spa, is a family-friendly vacation destination in Ko Olina, Hawaii, on the island of O’ahu. The luxury Resort isn’t all-inclusive but offers character experiences, pools, water slides, and over 30 complimentary family activities.

One of those activities is the Menehune Adventure Trail, an interactive treasure hunt for preteens and adults that teaches Guests about “Menehune—the legendary “little people” of Hawai‘i, known for their magical powers and mischief.”

Reddit user u/maxwellp101 visited Aulani this month and was disappointed to find that the Menehune Adventure Trail, which opened alongside the Resort in 2011, is apparently being neglected. Very few of the “high-tech” effects that Aulani and Disney advertise are functional:

Last working effects of menehune adventure trail @ Aulani (08/22)- rest do not work anymore 🙁 hoping they fix the trail! from disneyparks

The effects that are working appear run-down and water damaged. One comment described the trail as “underwhelming.”

“If you end up going to aulani please tell the cast as feedback to restore it to its original glory! It was great before these changes which the cast said was because of COVID,” the Aulani Resort Guest explained in a comment.

A Walt Disney World Resort fan asked if similar effects may be incorporated into EPCOT’s Moana (2016) walkthrough water attraction, Journey of Water, which is currently under construction. u/maxwellp101 replied:

Aulani costs, on average, anywhere from $500 to $700 a night. Disney Vacation Club members can also use points towards their stay. For an additional cost, Disney Resort Guests can enjoy a character breakfast with Stitch & Friends, try a Dole Whip on the Dole Plantation Tour, go saltwater snorkeling, and more.

Have you visited Aulani, A Disney Resort & Spa? What did you think?