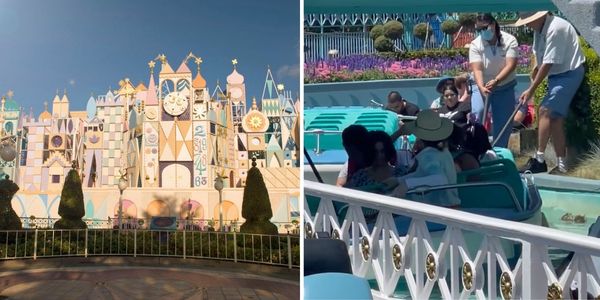 There may not be a more iconic and classic Disney Park attraction than “it’s a small world”. This attraction is a slow-moving boat ride that allows Guests to “Embark on a whimsical boat ride past a jubilant chorus of children from around the globe.

The ride can be found at Disneyland Park in California, Magic Kingdom in Florida, Tokyo Disneyland, Disneyland Park in Paris as well as Hong Kong Disneyland. However, the ride is quite old and has certainly seen its fair share of issues, breakdowns, and evacuations. Recently, one of the ride vehicles at “it’s a small world” had some issues returning to the loading dock.

A video was shared on Twitter from @DisMomKnows, which you can check out below:

As you can see, one of the boats couldn’t make it back to the loading area. Guests were at the mercy of Cast Members as they used specialized sticks to try and get the boat to move. Eventually, they got it unstuck, and Guests watching the situation unfold started to clap.

Earlier this month at Disney World, one of the boats actually started to sink, leaving Guests stuck for love an hour. In a situation like this, Guests are typically given a pass that allows them to bypass the standby line to make up for the time spent on the attraction.

“It’s a Small World (After All)” is a timeless classic and one of the most well-known songs of all time. Walt Disney actually asked the Academy Award-winning brothers, Richard and Robert Sherman, who were hard at work on Mary Poppins, to create a singular song that could be sung by Audio-Animatronics figures in multiple languages.

More on “it’s a small world” below: