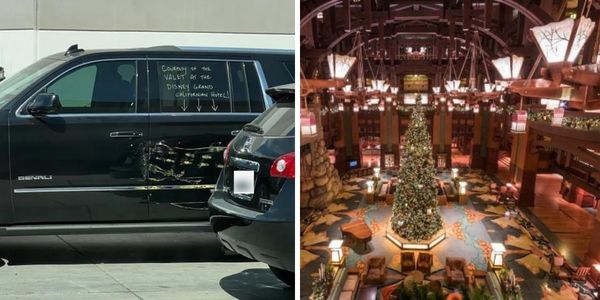 One Guest had a disappointing experience while staying at one of Disneyland’s premium hotels.

Disney’s Grand Californian Hotel gives Guests a California wilderness feel with a touch of Disney elegance and is described by the Disneyland website:

Recently, one Guest allegedly had a very disappointing experience at this premium Resort, however, involving a valet and a car crash. A photo went viral on Reddit which showed a banged-up car with a spiteful message written on the side.

You can see the photo below:

Seen outside the auto body shop

Seen outside the auto body shop from sandiego

As you can see, the vehicle is quite scratched and dented and is currently sitting at an auto body shop. The message on the car read, “Courtesy of the valet at the Disney Grand Californian Hotel!” While this is certainly not concert evidence that the valet actually is responsible for this, it is certainly disappointing if the message is true.

The vehicle appears to be a GMC Denali SUV and a newer-looking one at that. In the comment section, several users theorized how this could actually happen. One user said:

“That hotel is $600 and up a night. Looks like they took a turn too sharp and scraped along one of those metal pole barriers. The scratch front to back…..kept going by the looks of it. Job security at the body shop. Keep up the good work.”

While we cannot confirm what actually happened with Disney valet and the Guest, it is still quite a shocking sight to see out in the open.

Have you ever had issues with the valet at Disney?