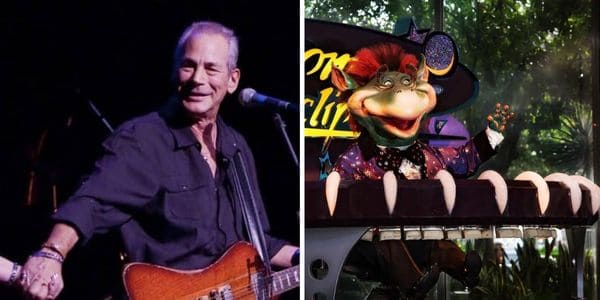 Sonny Eclipse is and has been a staple at the Walt Disney World Resort, residing in the often-crowded but comforting Cosmic Ray’s Starlight Cafe quick-service eatery.

Sonny Eclipse has played a 27-minute set throughout each day in Tomorrowland since 1995 and is accompanied by his fabulous yet invisible backup singers known as the Space Angels. Guests have the honor of listening to music and hearing Eclipse’s fantastically corny jokes all while they enjoy their meal which is made up of fairly standard burgers, fried chicken, and of course, french fries.

The character of Sonny Eclipse came alive thanks to the incredible voice of singer/songwriter Kal David. Sadly, we have learned that David passed away at the age of 79.

This was confirmed in a tweet from Tammy Tuckey (@TammyTuckey), which you is linked below:

Sad news from Kal David’s family… Kal passed away today. Aside from being a wonderful musician and singer, many of us Disney fans know his as the voice of our alien friend, Sonny Eclipse. He will always be our Bright Little Star!

Sad news from Kal David’s family… Kal passed away today. Aside from being a wonderful musician and singer, many of us Disney fans know his as the voice of our alien friend, Sonny Eclipse. He will always be our Bright Little Star! 💫😞 pic.twitter.com/iShgl9hVGn

No reason was given for David’s passing at the time of publishing this article. We will continue to update our story as more information comes out.

There are a ton of places to eat when visiting alt Disney World and the sheer amount of options can be overwhelming, to say the least. Cosmic Ray’s offers a no-nonsense selection of typical theme park food, complete with classic early 1990’s architecture and color schemes.

But perhaps this restaurant would not be anywhere near as special without Sonny Eclipse himself and, more importantly, Kal David, and we are so incredibly heartbroken to see the voice behind this wholly-original Disney Park character pass away. Some of Eclipse’s songs, which are all sung by David, include “Bright Little Star,” “Gravity Blues,” “Yew Nork, Yew Nork,” and “Planetary Boogie.”

David was a large part of the music industry for over six decades and, at one point, was part of the legendary band Chicago. David and his wife eventually started their own band and could frequently be found performing at B.B. King Blues Club in Los Angeles and at the Mohegan Sun Casino in Connecticut.

Who is your favorite Disney World character?