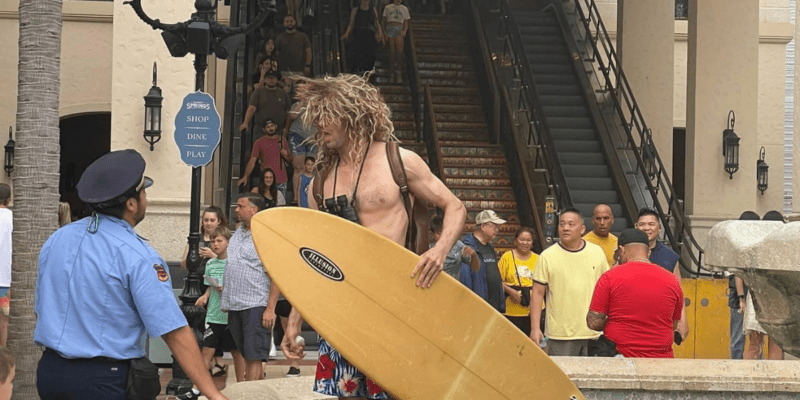 Surf’s up at Walt Disney World Resort, at least for Disney Guest.

When visiting Walt Disney World Resort, there is so much to see and experience. No matter which Disney Park you visit, whether it be Magic Kingdom, EPCOT, Disney’s Hollywood Studios, or Disney’s Animal Kingdom, there are plenty of fun rides, world-class entertainment, snacks, and merchandise to enjoy during your stay.

In addition to the Disney Parks, another area that is full of fun experiences to enjoy is Disney Springs.

Disney Springs is known for its many offerings, including restaurants, bars, entertainment, and shops.

However, on Saturday, it seems one Disney Guest was found in an area that they weren’t allowed to be in.

@MichaelSheehyJr shared a photo on Twitter of a man with a surfboard and binoculars being approached by Disney security while inside a fountain.

Some users on social media have speculated that the incident was likely a TikToker attempting to gain attention. However, no one has had any other answers on the matter at this time.

The picture has since been shared all across the Disney community and this Tweet has received nearly 2,000 likes.

No matter where you visit inside Disney World, it is important to show respect to fellow Guests and Cast Members alike. Disney is a family-friendly theme park and any offensive gestures, berating, yelling, altercations, or trespassing in areas that you aren’t allowed to be can result in expulsion and even being banned depending on the severity of the incident.

Have you ever experienced an incident like this at Walt Disney World Resort? Let us know in the comments!