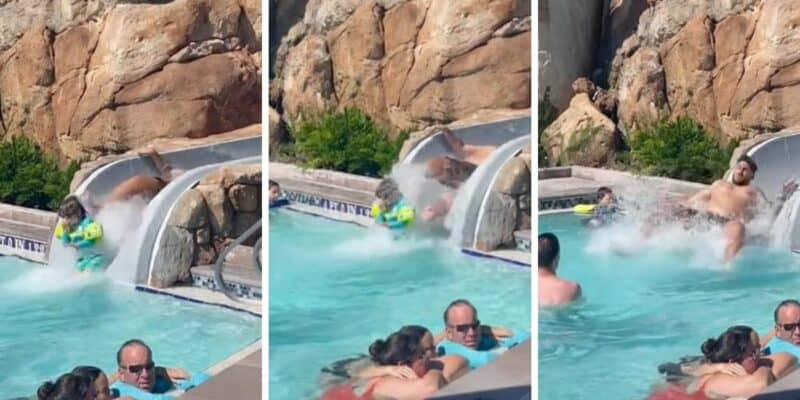 Recently, so-called “Disney Adults” have repeatedly become a hot topic for the Internet, receiving a ton of slack and hate. The term “Disney Adult” typically refers to a childless adult who loves Disney films, the Disney Parks, Disney Cruise Line, and Disney merchandise.

Many “Disney Adults” are not letting the hate and backlash get to them as they take to social media and say they are proud to be a “Disney Adult”. Others are using the term to make fun of themselves.

One Disney World Resort Guest mocked the term “Disney Adult” and used it against her husband in a joking way after an incident took place involving her husband and a waterslide.

daniellesmagicalifestyle shared a video to TikTok, which you can see below. The video shows a child sliding down a waterslide at Disney’s Riviera Resort, quickly followed by her husband sliding down and accidentally trampling over her. She captioned the video:

It is great to hear that the child was okay and no one was injured in this incident. If you ever go down the waterslide at Disney, or anywhere else, make sure to leave enough time between you and the Guest in front of you to avoid any injuries.

This incident took place at Disney’s Riviera Resort, which is inspired by Walt Disney’s travels in Europe with all the magical touches you can expect from Disney. With elegant, modern and classic 20th-Century furnishings, this resort makes guests feel like they are vacationing in the french riviera. Beautiful and eclectic art pieces don the walls and hallways throughout the Resort showcasing Disney artistry that tells the story of the Riviera Region’s art heritage.

Enchantment awaits you at a Resort hotel that’s inspired by Europe and imagined by Disney. Here, you can delight in exhilarating activities, delectable dining and stylish accommodations—from cozy Tower Studios to spacious villas with up to 3 bedrooms.

Have you ever witnessed something like this at a Disney World Resort? Let us know in the comments below.