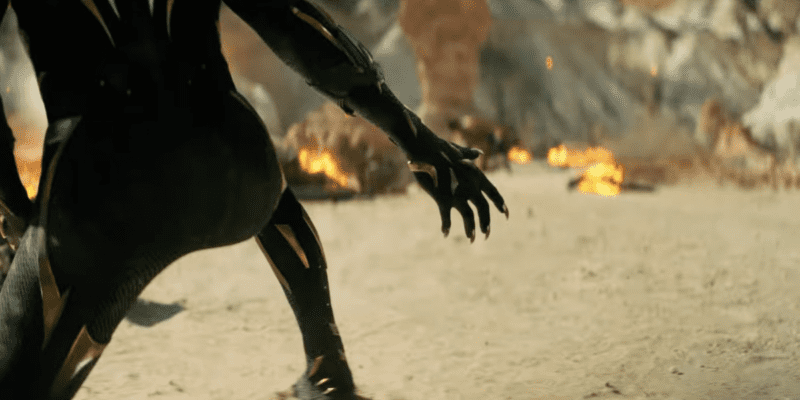 In the highly anticipated unveiling of the Black Panther: Wakanda Forever (2022) trailer at this weekend’s San Diego Comic-Con, fans were given a gut-wrenching glimpse of life after T’Challa.

The King of Wakanda was previously played by Academy Award-nominated actor Chadwick Boseman, who filmed the original Black Panther (2018) while secretly battling colon cancer. He succumbed to his illness in 2020 before he was able to reprise his role as the first black superhero in the film’s sequel.

The Wakanda Forever trailer revealed that Boseman’s beloved T’Challa suffered a similar fate, as his death was confirmed in the 2-minute action-packed teaser.

Though this did not come as a surprise to many, one shot featured at the trailer’s conclusion has fans questioning: who is wearing the claws?

One fan took to TikTok to share their theory:

♬ No Woman No Cry (late set) – Bob Marley And The Wailers

User @dreadpiratedad (Mike) opens the video by listing the potential characters fans could see donning the iconic vibranium-weaved Black Panther suit, having heard theories that Princess of Wakanda Shuri, River Tribe member Nakia, Dora Milaje General Okoye, Jabari Tribe Leader M’Baku, and even Supervillain Killmonger (either back from the dead or from another timeline,) were all possibilities.

But Mike has a theory of his own. Come November when the film hits the big screen, he hopes that T’Challa’s mother Queen Ramonda is revealed to be the woman behind the claws.

There are a few clues in the trailer that lead Mike to believe that the Queen herself is the one suited up in the last few seconds of the clip, and he lists them as follows:

Mike concluded his theory by sharing that he doesn’t think that Queen Ramonda will take over the role permanently and that he hopes to see multiple characters suit up in this next film, but that he’d love to see “Stella get her groove back and step on Namor’s neck” this fall.

Who do you think will suit up in Black Panther: Wakanda Forever (2022)? Tell us in the comments below!