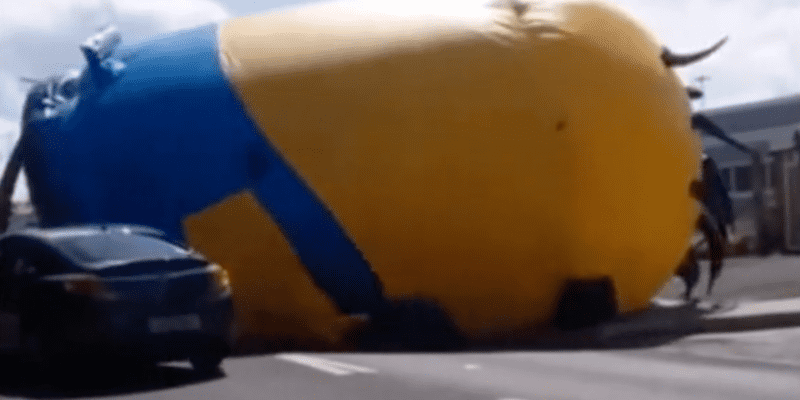 A giant inflatable Minion recently suffered a major mishap, resulting in traffic being shut down.

Minions: The Rise of Gru (2022) took over theaters in a major way this past weekend.

The film has caused a viral TikTok trend and broke a record for a July 4th weekend opening at the box office. The movie, by Universal Pictures and Illumination, ended up making more than $120 million in the U.S. and is estimated to have made more than $200 million worldwide.

But, it’s not just the film that has caused many to go bananas.

Just recently, user @tabarnakmat shared a video on TikTok that has received millions of views.

As you can see in the video, a giant inflatable minion somehow got loose. It ended up rolling into the road and covering cars.

Universal has gone “all in” on the Minions moving forward. Universal Orlando Resort is rumored to be building another Minions attraction right across from Despicable Me: Minion Mayhem at Universal Studios Florida. In addition, a Minions Cafe is set to take over the space that used to be occupied by Universal’s Classic Monsters Cafe. Universal Studios Hollywood already possesses a Minions cafe.

More On Minions: The Rise of Gru:

Here’s what Illumination says about Minions: The Rise of Gru:

Do you have plans to see Minions: The Rise of Gru? Let us know in the comments!

Comments Off on VIDEO: Giant Inflatable Minion Shuts Down Traffic After Suffering Mishap