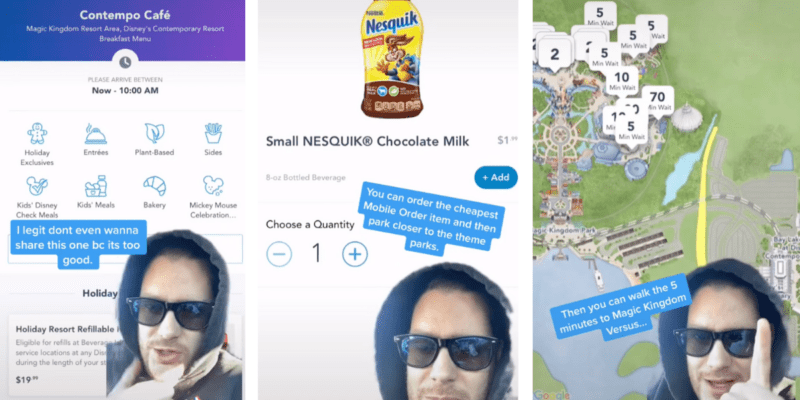 It’s no secret that a Walt Disney World Resort vacation is expensive. Some families save for years for that once-in-a-lifetime, magical trip.

#duet with @Kirk How to Park At Disney For Only $1.99! 😱✨ #disney #disneytiktok #disneyparks #fyp #fypシ #fypage #disneyworld

The video was shared by @everythingdisney133 but originates from a Disney Park fan named Kirk (@walruscarp). In it, Kirk responds to a prompt asking “What’s a piece of information that you learned that feels illegal to know?”

Kirk tells fellow Disney Parks fans that you can mobile order the cheapest thing on a Walt Disney World Resort restaurant menu and then park at the hotel for free to pick it up. Instead of just picking up your order, however, Kirk suggests walking over to Magic Kingdom from hotels like The Contemporary, which offers a walkway to the Park:

“I legitimately don’t even want to share this one. You can order something as cheap as $1.99 chocolate milk and then park at places like the Contemporary because you ordered from Contempo Cafe, and you need to pick up your mobile order. But guess what? You now have access to the walkway, and you can park your car and walk directly into Magic Kingdom for $1.99 versus using the TTC, which will take you at least 25 to 30 minutes. Seriously, don’t abuse this one. It scares me. If it goes away, I’ll be so, so upset.”

Typically, it costs $25 to park at Walt Disney World Theme Parks or the Transportation and Ticket Center, which transports Guests to EPCOT and Magic Kingdom.

Some fans were upset that Kirk shared the hack because it might cause Disney to crack down on abuse of the system. “It was good while it lasted. Great job everybody,” @rockyork wrote.

Another said that Walt Disney World Resort hotels are already limiting mobile order pickups for this reason. From @randigalvan717:

@kirap96 said that this hack will quickly get “abused” and others begged @everythingdisney133 to delete the video so that Walt Disney World doesn’t crack down on mobile orders.

As tempting as it may be, this “hack” isn’t recommended – free parking at Walt Disney World Resort hotels is meant for the time period in which Guests are dining only.