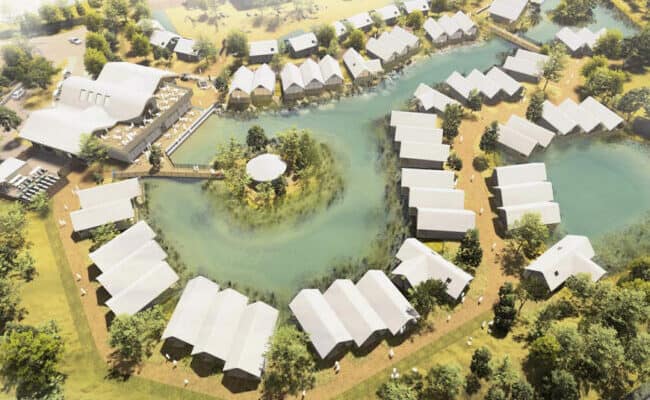 One of the United Kingdom’s leading animal destinations, Chester Zoo, has set plans for a highly-immersive savannah-style hut experience, giraffe feeding station, and all.

Chester Zoo opened in 1931 and has since gone on to become one of the UK’s largest animal parks and hubs of conservation. Boasting 2 million visitors in 2019 alone, Chester Zoo sits on 400 acres of land, with attractions and animal experiences spread out over just 130 acres. But that could soon change, as the wildlife park has put forward plans to build upon 36,550 sq ft of space, continuing their massive expansion (Grasslands) masterplan.

The application, which can be found on the Public Access System via the Cheshire West and Chester Council, states the following work:

Erection of a two storey reception building with service area, and 63 accommodation lodges, associated ground works including formation of lakes, hard and soft landscaping including service road, and erection of fencing and a bridge.

Place North West consolidated the application requests which include a 120-table restaurant and a giraffe feeding station. The report says:

Under the proposals, there would be 54 lodges of varying styles constructed immediately, with nine more to be built as a part of a future phase. The lodges will be part of the main zoo, located off Caughall Road in Upton. Inside the welcome building would be a 120-cover restaurant, bar facilities, staff areas and offices. A giraffe feeding station would be included to allow visitors to get close to the animals on the fully accessible site. Chester Zoo is working with planners Gillespies and design team Buttress Architects and BDP Engineering on the project.

Plans for the new huts and giraffe experience are yet to move forward but the development is definitely akin to places like Disney’s Animal Kingdom Lodge or the Kilimanjaro Safari at Walt Disney World Resort, where Guests can request a savannah view room in order to get an up close glimpse of the Resort’s African animals.

Would you visit these new huts at Chester Zoo? Let us know in the comments down below!