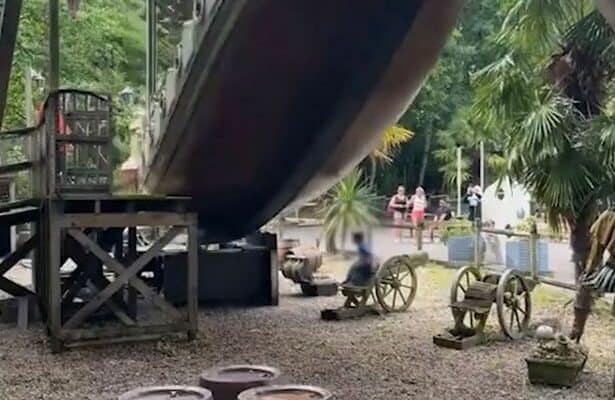 A boy was nearly crushed by an attraction at a popular theme park after jumping into the restricted area.

When visiting a theme park– no matter whether it be Walt Disney World Resort, Disneyland Resort, any other Disney Park around the world, Universal Orlando Resort, Universal Studios Hollywood, Six Flags, Busch Gardens, or SeaWorld– the most important facet of the day is for every Guest to be safe.

A young child elected to climb over a fence into a restricted area in the theme park. Onlooker Andy Moore shared more about the incident with Manchester Evening News:

“I was stood in line with my young child and we were taking pics of each ride we went on, when this child climbed the fence and ran towards the ride. He spent a while playing on the cannons while the pirate ship was in full swing.”

After moments of screaming, an adult jumped the fence and grabbed the child.

“The parent of the child was nowhere to be seen at first. Then the staff member saw what everyone was shouting at and stopped the ride,” Moore said. “The child got very close to it and didn’t appear to realize the danger that was involved. A member of the public on the other side jumped over the fence to grab the child. I couldn’t as I didn’t want to leave my young child alone.”

DailyStar shared the photo and video, taken by Andy Moore, on Twitter.

As you can see in the photo, the young boy jumped over the fence to play with the cannons on the other side. Theme park attendants were seemingly not aware that he was there and he comes uncomfortably close to the attraction.

This isn’t the first incident to occur at a theme park recently, many Guests have even shared that they are “deterred” from riding attractions.