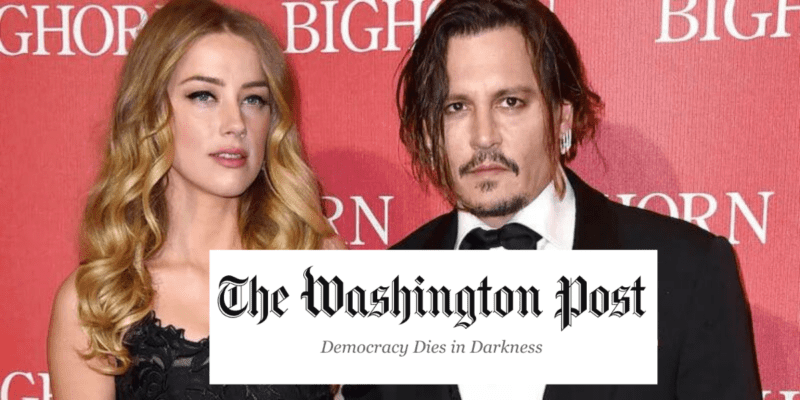 Following the verdict in the defamation trial between Johnny Depp and his ex-wife, Amber Heard, The Washington Post has added an editor’s note to the Op-Ed that started it all.

The Fairfax County Court’s verdict is considered a victory for Depp. The jury, finding that Heard had defamed him by referring to herself as a victim of domestic violence, awarded the Pirates of the Caribbean (2003) star $15 million.

Heard countersued, arguing that he “defamed her when his former lawyer released statements saying her allegations of domestic abuse were a hoax.”  Depp was found liable for the statements made by his former attorney, Adam Waldman, and was ordered to pay Heard $2 million.

On June 2, just a day after the verdict was announced, The Washington Post added the following disclaimer to Heard’s original Op-Ed, which Depp used as grounds to sue the Aquaman (2018) star:

In 2019, Johnny Depp sued Amber Heard for defamation arising out of this 2018 op-ed. On June 1, 2022, following a trial in Fairfax County, Va. Circuit Court, a jury found Heard liable on three counts for the following statements, which Depp claimed were false and defamatory: (1) “I spoke up against sexual violence — and faced our culture’s wrath. That has to change.” (2) “Then two years ago, I became a public figure representing domestic abuse, and I felt the full force of our culture’s wrath for women who speak out.” (3) “I had the rare vantage point of seeing, in real time, how institutions protect men accused of abuse.” The jury separately found that Depp, through his lawyer Adam Waldman, defamed Heard in one of three counts in her countersuit.

Mr. Depp was not present in the courtroom when the verdict was read on Wednesday as he was still in the U.K. after making a few surprise appearances at Jeff Beck gigs. Shortly after the verdict, he released a statement, writing, in part, “The jury gave me my life back.”

Ms. Heard, who was present in the courtroom on June 1, also released a public statement in which she referenced the libel trial Depp lost against The Sun in the United Kingdom in 2020 after they called him a “wife-beater.”

“I’m sad I lost this case. But I am sadder still that I seem to have lost a right I thought I had as an American – to speak freely and openly,” Heard wrote, in part.

What do you think of the verdict in the trial between Johnny Depp and Amber Heard? Let us know in the comments.