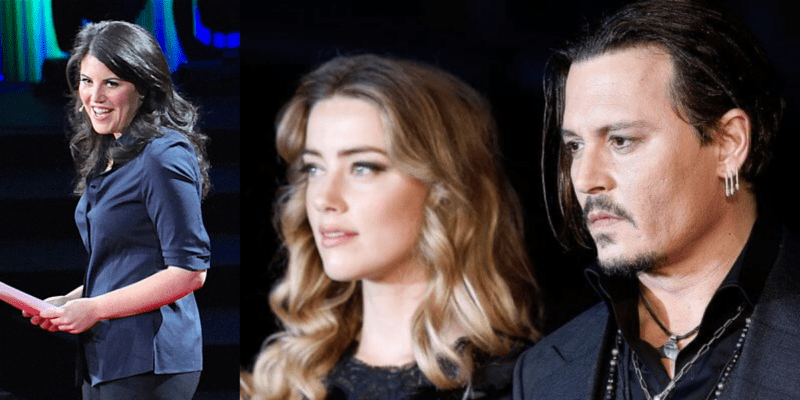 After seven weeks in Virginia’s Fairfax County Court, a verdict was announced on Wednesday in the defamation trial between Johnny Depp and his ex-wife, Amber Heard.

The Pirates of the Caribbean (2003) star sued the Aquaman (2018) star after she wrote an Op-Ed for The Washington Post in which she described herself as a victim of domestic violence. Heard countersued, arguing that he “defamed her when his former lawyer released statements saying her allegations of abuse were a hoax.”

The jury found that Heard did defame Depp with her statements and that Depp proved in court that some of Heard’s statements were false. She was ordered to pay Depp $15 million.

Depp was also ordered to pay Heard $2 million after the jury found him liable for defamatory statements made by his former attorney, Adam Waldman, alleging that Heard was lying about being a victim of domestic abuse.

This week, Monica Lewinsky, who advocates against cyberbullying, weighed in on the publicized trial and how we’ve responded to it as a culture.

In a Vanity Fair Op-Ed, Lewinsky spoke about her own experience with online harassment following her involvement with President Bill Clinton in 1998 and how it impacted her view on the Depp-Heard trial. She admitted closely following the conflict between Mr. Depp and Ms. Heard but expressed concern about how it was discussed on the Internet.

“We are all guilty,” Lewinsky wrote, concerned about “the ways we have stoked the flames of misogyny and, separately, the celebrity circus.”

Lewinsky said it’s not just about Depp and Heard or how you feel about them as individuals or in the context of the trial. “It’s the cultural collateral damage,” she wrote.

“Because the trial has also been available live on our screens, we think, subconsciously, that we have a right to look and watch. To judge. To comment,” Lewinsky argued, not excluding herself from those who were obsessed with the trial. “This blurring of public figures and private lives can do a number on us—as bystanders, as an audience.”

However you feel about Amber Heard, the online messages directed at her are “cruel and vitriolic,” Lewinsky wrote. She described the memes about Depp’s attorney Camille Vasquez as “girl-on-girl action,” writing, “That’s on Misogyny’s greatest-hits album.”

Lewinsky questioned how far is too far when it comes to this trial, writing of online harassment and cruelty, “the scars never fade.” She continued, I’m certainly not here to tell you not to watch the verdict or not to have an opinion. But what is too much? What is defined as “too far”?”

“As we have watched this story unfold, what does our opinion entitle us to?” Lewinsky wrote. “Does it entitle us to say whom we “believe”? To restate the cherry-picked facts we’ve glommed on to that have led us, as virtual jurors, to “just feel it in our bones”?”

Maybe it does, Lewinsky writes. She’s not sure. She continues, “But does it entitle us to be cruel? I’m not talking about freedom of speech. I’m talking about social media participants recognizing that they are also part of a society of human beings.”

Lewinsky expresses concern over our perceived involvement in the trial and what that entitles us to when the Depp-Heard trial surrounded traumatic events between a former couple.

“Does our opinion toward this case entitle us to feel so superior—or inferior—that we can create a meme or a TikTok or a tweet saying something that gets other people to laugh at someone who is already suffering?” Lewinsky wrote. “Do we have a “right” to get dopamine hits—or money—from our number of followers or retweets or clicks?”

Do you think the public conversation around the trial between Johnny Depp and Amber Heard went too far? Let us know in the comments.