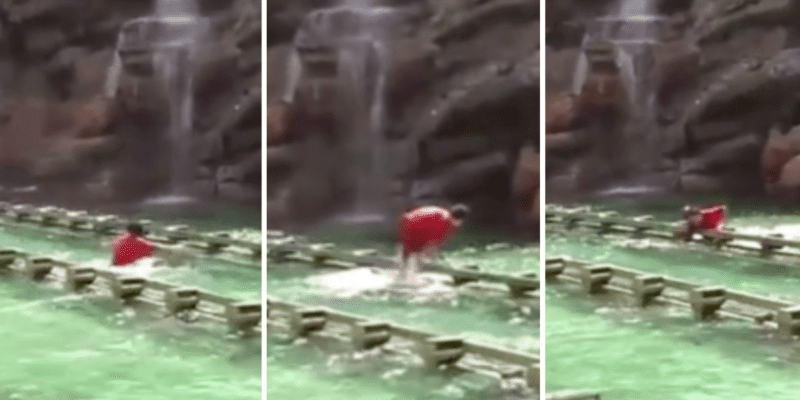 A Universal Orlando Resort Guest risked their life to retrieve a lost article on a popular water attraction.

When visiting Universal Orlando, there is so much to see and experience. You can check out two world-class theme parks in Universal Studios Florida and Universal’s Islands of Adventure and a uniquely-themed water park in Universal’s Volcano Bay. In addition, Universal Orlando Resort is currently in the midst of constructing its largest theme park to date in the Epic Universe, which will open in 2025.

There are plenty of attractions to enjoy, like experiencing the Wizarding World of Harry Potter, as well as many others including Despicable Me: Minion Mayhem, E.T. Adventure Ride, The Amazing Adventures of Spider-Man, The Incredible Hulk Coaster, Jurassic World Velocicoaster, and of course, Jurassic Park River Adventure.

User @disney_stuffbackup recently shared a video on TikTok that has users completely going out of their mind.

As you can see in the video, a young Universal Park Guest elected to jump the barricade and swim through Jurassic Park River Adventure to retrieve their hat. While the video notes it at Universal Studios Hollywood, this is actually at Universal’s Islands of Adventure in Orlando. This is extremely dangerous behavior that could’ve resulted in extreme injury or even death.

Guests who trespass on an attraction can potentially be banned from the theme parks and even arrested depending on the severity of the situation. This particular incident endangered not only the life of the young Guest who was swimming in the water, but also those riders if a boat had gone down the 85-foot drop while he was in the tracks.

The timing of this video has not been confirmed, but it doesn’t seem that the incident happened recently. Still, this was absolutely insane and extremely dangerous.

Have you ever seen anything like this happen before? Let us know in the comments.