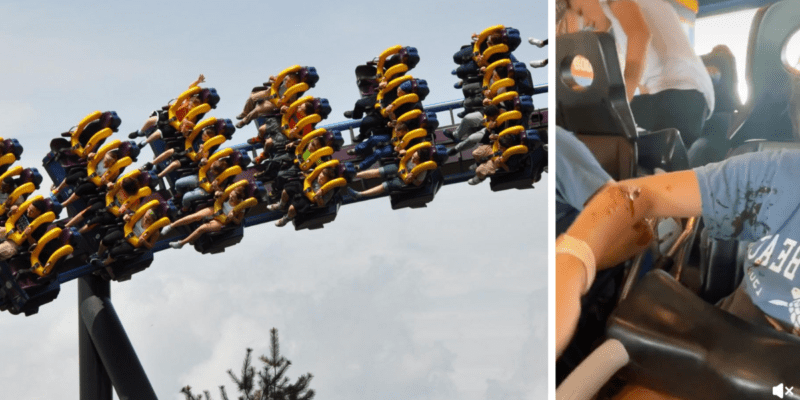 A recent ride on a rollercoaster resulted in riders being soaked in barbeque sauce.

No matter what theme park you visit– whether it be a Disney Park like Magic Kingdom at Walt Disney World Resort, or Disneyland Park at Disneyland Resort, or another like Universal Orlando Resort, Universal Studios Hollywood, the all-new Lost Island Theme Park, Busch Gardens, SeaWorld, Six Flags, and many others– you want to know that you’re safe during your visit.\

However, recently, it seems that there has been an uptick in incidents occurring at theme parks.

On a rollercoaster ride at Six Flags New England, a Guest recently found themselves in a situation they certainly were not expecting.

As you can see in the video, the user is covered in barbeque sauce coming back into the station. They say that someone threw the barbeque sauce at the train while it was moving and, as a result, they were completely covered. Six Flags New England apologized for the incident and gave the Guests free express passes for the remainder of their day in the theme park.

This isn’t the first recent instance of people throwing items at a coaster or from a coaster. Universal Orlando just added more security cameras near its new attraction the Jurassic World Velocicoaster because Guests were allegedly throwing items at the train as it passed by. At Walt Disney World Resort, a video just recently went viral from a Disney Park Guest spraying Cheez-Whiz into a crowd of people while riding Big Thunder Mountain Railroad.

If you visit a theme park, please remember to be courteous of others. Instances like these can result in Guests being kicked out of the theme park and even given bans if the incident is serious enough.