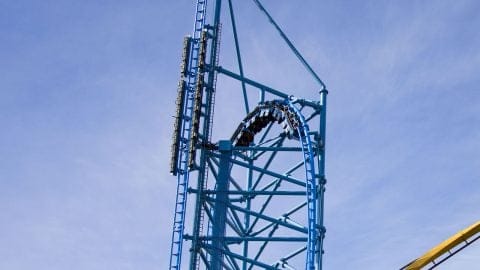 People all over the world enjoy visiting theme parks. Whether it be a Disney Park, like Magic Kingdom at Walt Disney World Resort or Disneyland Park at Disneyland Resort, or it be others, including Universal Orlando Resort, Universal Studios Hollywood, Busch Gardens, SeaWorld, Six Flags, the all-new Lost Island Theme Park, Cedar Point, and others, theme park enthusiasts go expecting and fun and memorable experience.

However, every theme park ride is subject to malfunctions from time to time.

One popular attraction at Six Flags Over Texas, however, is seemingly having a “rough go” at it as of late.

Mr. Freeze: Reverse Blast, a popular coaster at the theme park, suffered a major malfunction this spring when the attraction caught fire. As a result, seven people, including a staff member who suffered a minor injury, were taken to the hospital.

Now, it seems the attraction has suffered another malfunction.

A recent Reddit poster shared that the coaster recently valleyed.

Well, Mr. Freeze cant catch a break this year, a few months ago it caught fire and now it valleyed!

For those who don’t know, a “valley” for a roller-coaster means that the train does not have enough inertia to make it through an element. As a result, it comes to a stop, typically in a portion of the track that looks like a valley. These instances are rare, but they do happen with major roller coasters.

Have you ever ridden Mr. Freeze: Reverse Blast? Let us know in the comments!