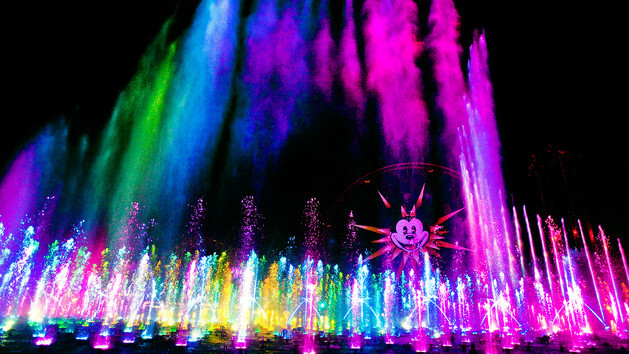 'WORLD OF COLOR' -- Lights, water, music, fire and animation come together like never before in ÒWorld of ColorÓ at Disney California Adventure park in Anaheim, Calif. The show combines nearly 1,200 powerful fountains with heights that range from 30 feet to 200 feet in the air, dazzling colors and a kaleidoscope of audio and visual effects, including both classic and new animation projected on one of the worldÕs largest projected water screens Ñ a wall of water 380 feet wide by 50 feet high for a projection surface of 19,000 square feet . Presented on Paradise Bay in Disney California Adventure park, ÒWorld of ColorÓ is a major milestone in the multi-year expansion of the park. (Paul Hiffmeyer/Disneyland)

Disney California Adventure has plenty to offer Guests as they walk the roads Walt had in Hollywood, enjoy a hand-dipped corn dog at Award Wieners, and check out the new Marvel-themed land in Avengers Campus, where they can meet so many Marvel characters and take a ride on WEB SLINGERS: A Spider-Man Adventure and Guardians of the Galaxy: MISSION BREAKOUT. If that weren’t enough the theme park is home to Cars Land, which includes Radiator Springs Racers, as well as many more fun attractions like The Incredicoaster and Soarin’.

One of the most popular attractions at Disney California Adventure is the nighttime spectacular “World of Color.” The show takes place in Paradise Bay each night and treats Guests to a unique color-filled water extravaganza.

As you can see in the video, the scuba divers look like they’re getting set for a dive. While it’s certainly an odd site, this is one that is normal around Disneyland. Disney uses scuba divers as machinists to fix, repair, and refurbish items in the bodies of water. Nothing has been confirmed on what was being fixed by this group, but it’s certainly not something you’ll see everyday while visiting the Disney Park.

Have you ever seen scuba divers at Disney California Adventure? Let us know in the comments!