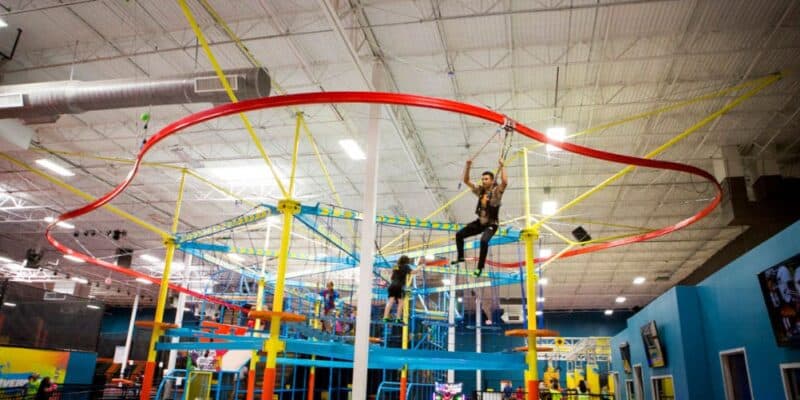 As reported by ABC7 Chicago, a mother is now suing an indoor theme park after a frightening incident that could have turned fatal.

At Urban Air Adventure Park, an indoor amusement park that features all kinds of activities, a zip line harness that secures Guests’ waists ended up wrapped around a young mother’s neck. The mother claimed she thought she was going to die during the incident.

“I couldn’t breathe. I was gasping for air. All I can do was grab onto the rope,” said Evelyn Rapier. Rapier was at the park celebrating a birthday party for her three-year-old daughter at Urban in Bloomingdale last year. A video shows her in the air struggling.

“For some reason the rope was around my neck instead of around my stomach. I don’t know how it got around my neck. All I can remember is I can’t breathe. I’m going to die. I felt blood going through my face. My eyeballs,” Rapier said. “I was moving around, thinking about my kids, thinking about my husband, what’s going to happen? Like, no, I’m gonna die. This is it. Like this is this is my last moment and it’s going to be on my three-year-old’s birthday party.”

Rapier is now filing a lawsuit for the incident. According to the suit, the ride was unsafe and claims that defendants “should have known of the dangerous condition created by allowing an unsecured harness to be placed in service and used by patrons.”

“It appears that the people working there are not properly trained to put on the equipment and maybe even that the equipment that they’re providing people is faulty,” said Marc McCallister, Rapier’s attorney. “If the harness is not properly fastened around the customer, or not fitted properly, it can ride up, cinch or become restricted around different parts of the body.”

Urban Air Adventure Park responded to a request by ABC 7 Chicago, saying, “The safety and well-being of our guests and employees is Urban Air’s highest priority in everything we do. One injury is one too many, but what’s important to remember is ride safety is a shared partnership between the park and their guests and it’s essential they follow posted and verbal guidelines and instructions. Out of an abundance of caution, all staff members were retrained after the event on November 19, 2021.”

Rapier was treated at an emergency room after the incident and suffered from rope burns on her neck. She claims the situation “traumatized” her and she will never be the same. “I’m experiencing memory loss and problems with my speech,” she said.

Urban Air Adventure Park is much more than a trampoline park. If you’re looking for the best year-round indoor attractions in the Bloomingdale area, Urban Air is the perfect place. With new adventures behind every corner, we are the ultimate indoor playground for your entire family. Take your kid’s birthday party to the next level or spend a day of fun with the family and you’ll see why Urban Air Adventure Park is the best place for jumping, climbing, riding, playing, and fun for all ages

Have you visited this amusement park?