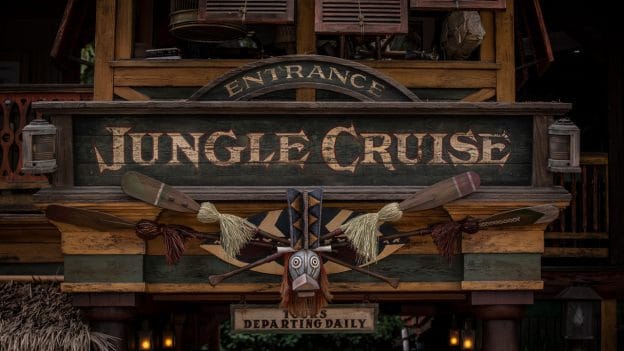 Jungle Cruise in Adventureland at Disneyland Resort reopened in July 2021 with newly reimagined scenes! Over the last 67 years, millions of Disneyland Guests have boarded this adventurous boat ride into tropical jungles from around the world.

For a group of recent Disney Park Guests, their jungle adventure nearly went south! Tasha Bantau (@mom_of_3_crazy_girls on TikTok) shared a video of herself and other Guests stopping unexpectedly on Jungle Cruise.

Another boat is stopped just ahead of Bantau’s boat. Jungle Cruise wasn’t evacuated, so this was likely just a temporary stop to fix a minor issue or load or unload Guests.

As Bantau turns the camera around, another Jungle Cruise boat comes speeding around the corner and is inches away from crashing into hers:

“I was this close to becoming rich by suing Disneyland for neck and back injuries for a Jungle Cruise boat accident,” Bantau joked.

Thankfully, no one aboard Jungle Cruise was injured and the treacherous journey went on as planned!

Jungle Cruise opened on July 17, 1955 at Disneyland and on October 1, 1971 at Walt Disney World Resort! Later iterations of the ride were added at Tokyo Disneyland and Hong Kong Disneyland. It also inspired a 2021 film, Jungle Cruise, starring Dwayne Johnson and Emily Blunt.

This hilarious boat ride is perfect for all ages and accommodates all heights. From Disney:

What’s your favorite Jungle Cruise joke? Let us know in the comments!