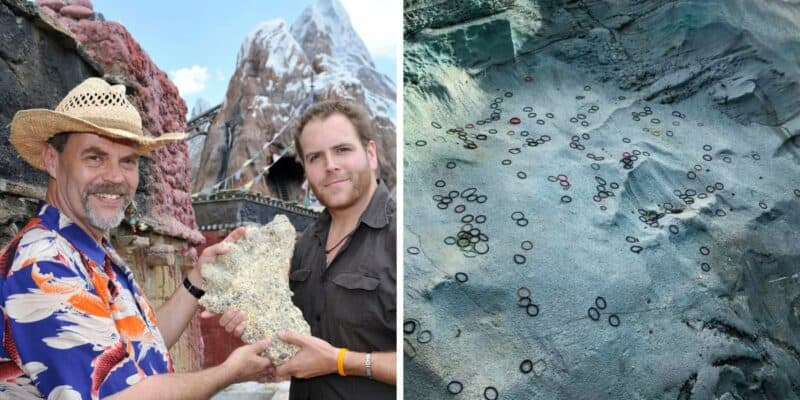 Expedition Everest in Disney’s Animal Kingdom is one of the most popular coasters on property. Guests are always eager to climb aboard the train and venture up into Mount Everest. However, as many of you know, the ride is soon interrupted when riders are stopped dead in their (broken) tracks.

Once Guests stop at the broken tracks, they may notice hundreds of hair ties thrown onto the sides of the mountain. This has been going on for years, with new hair ties showing up every single day.

Some speculate that these are from the cheerleaders who visit Walt Disney World for the annual Cheer and Dance competition. Others assume that the hair tie build-up is something as simple as one Guest accidentally dropping one and then others copying it.

Joe Rohde was with The Walt Disney Company for more than three decades. He was the lead designer for Disney’s Animal Kingdom as well as helped create attractions such as Expedition Everest.

Although Rohde has retired from the company (his last day at Walt Disney Imagineering was on January 4, 2021), he is now taking to social media to speak out about the hair ties on Expedition Everest, comparing them to what people do at the top of a real Himalayan pass. Rohde writes:

More ritual behavior. The hair scrunchies! The hair tie thing at the top of Everest is Weird but also ritualistic. It violates the illusion of the scene, but it oddly parallels what people do at the top of a real Himalayan pass…which is to leave a rock. Obviously someone started it, but what is significant is the huge numbers of people who follow along. What’s going on with that? It messes with the illusion of the fantasy place completely… However, it creates a very real interactive ceremony at the actual top of the highest point of the ride. I cannot condone this behavior partly because some poor person has to clean it up…but it does interest me.

This is not the first time Joe Rohde has spoken out on the hair tie ritual at Expedition Everest. In September 2021, the former Disney Imagineer took to Twitter to share some thoughts, which you can read more about here.

What do you think about the hair ties on Expedition Everest? Let us know in the comments below.