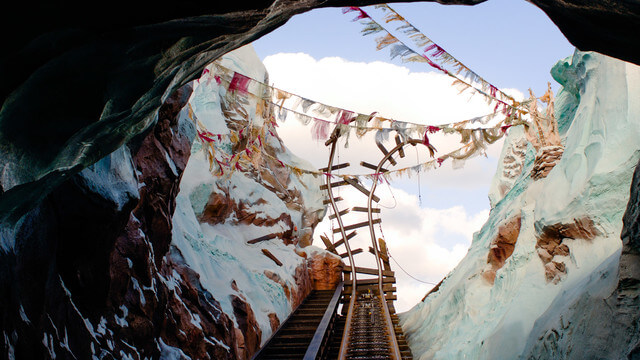 If you have ever been on Expedition Everest – Legend of the Forbidden Mountain, you may have noticed that there are a lot of hair ties at the top of the mountain.

For some odd reason, when Guests approach the broken tracks of Expedition Everest, it has become a tradition for many to toss a hair tie on the rockwork before going backward. There are probably hundreds if not thousands of hair ties that have been thrown on top of the rocks in the past, and even when Cast Members remove the hair ties, the mountain is quickly replenished shortly after.

Retired Imagineer Joe Rohde (@Joe_Rohde), one of the Imagineers who created the attraction, often takes to Twitter to answer Disney fan questions and was asked about the infamous hair tie collection on top of Everest.

That is apparently an organically developed tradition that came as a surprise. In the Himalayas it’s little rocks piled at the top of a pass…at Disney’s Animal Kingdom it’s hair ties I guess.

On many water attractions, Guests often toss in coins that Disney collects for charity. Of course, you cannot donate hair ties to charity, so they likely are thrown in the trash after being collected. From the tone of Rohde’s Tweet, it seems that he is not upset about the tradition that was created around the attraction after comparing it to the Himalayas!

Disney describes Expedition Everest – Legend of the Forbidden Mountain as:

As a reminder, from January 4 through mid-April 2022, Expedition Everest – Legend of the Forbidden Mountain will be closed for refurbishment at Disney’s Animal Kingdom.

Have you ever tossed a hair tie on Expedition Everest?