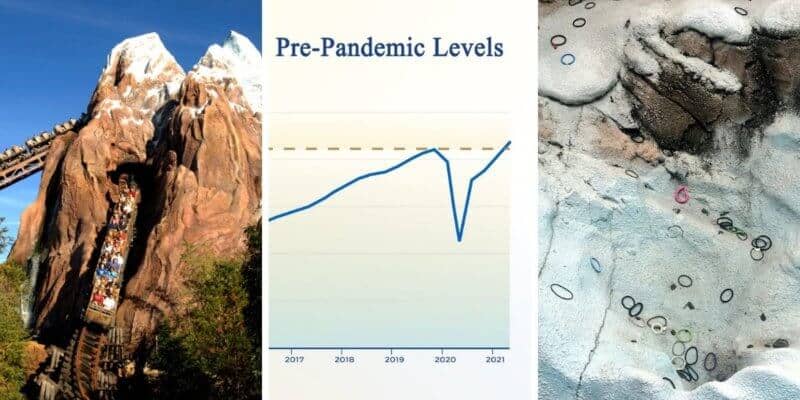 Expedition Everest in Disney’s Animal Kingdom is one of the most popular coasters on property. Guests are always eager to climb aboard the train and venture up into Mount Everest. However, as many of you know, the ride is soon interrupted when riders are stopped dead in their (broken) tracks.

Once Guests stop at the broken tracks, they may notice hundreds of hair ties thrown onto the sides of the mountain. If you are not aware of the famous hair ties at Expedition Everest, two years ago, Christian (@Tarhic78 (shared the following photo to Twitter:

Related: Guests Experience Expedition Everest Without Part of the Track!

Some speculate that these are from the cheerleaders who visit Walt Disney World for the annual Cheer and Dance competition. Others assume that the hair tie build-up is something as simple as one Guest accidentally dropping one and then others copying it.

Regardless of the reasoning, the hair ties at Expedition Everest have become just as popular as other elements of the ride. Well, one user took to Reddit to share a new “graph” showing that the hair ties on Everest are back to pre-pandemic levels.

Now, this is clearly a joke that this Reddit user created, but that doesn’t mean we didn’t get a chuckle out of it! Funny enough, despite this being a joke, this graph does make sense as you can see a drop in 2020 which is when the theme parks had to temporarily close due to the ongoing pandemic.

The Reddit user seemed to have used the GDP graph released by the President of the United States on Twitter and with a bit of photoshop work, this user changed “Billions of Chained 2012 Dollars” to “Billions of Hair Ties”.

All in all, even though it is clearly a joke, this graph was very creative and we got a kick out of it!

Have you ever tossed a hair tie when on Expedition Everest? Let us know in the comments below.

If you want to ride Expedition Everest on your next Walt Disney World vacation, be sure to start planning today. Our friends at Academy Travel are here and ready to help you every step of the way. Get started by clicking here.