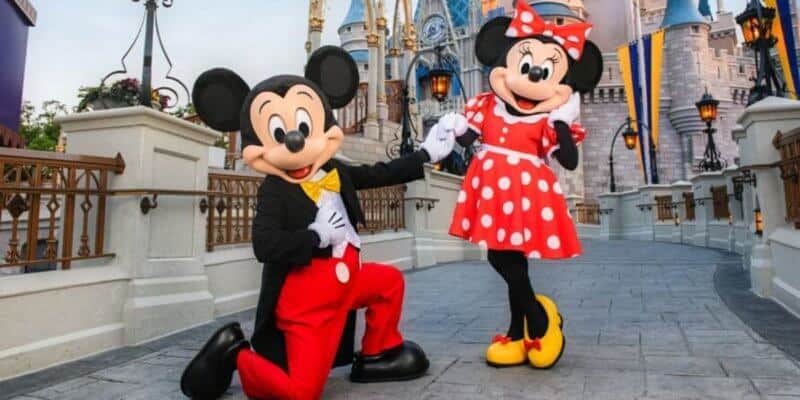 Just how long have Minnie Mouse and Mickey Mouse been married? It was the trivia question from a Cast Member that finally stumped me. I stood there, dumbfounded, racking my brain for any sort of clue, but I came up dry. The answer he gave me? Zero years. They had never had a wedding. But the real answer stated by Mickey’s creator has a very different perspective!

How Long Have Minnie and Mickey Been Married?

Combing the archives, it’s true. You won’t find a short or feature dedicated to Minnie and Mickey’s wedding, which made sense to me. Maybe they were never married. Sure, there are plenty of depictions of the two mice dating, courting, and working together. But not a spec of a civil or religious ceremony!

It’s been taken, now, as granted that the two mice are not married, since they don’t share a home, do not regularly act as a married couple, but instead two that are forever “going steady” over the last 95 years. However, according to the Walt Disney Family Museum, we’re all mistaken, including that Walt Disney World Cast Member with the trivia.

In the September 30, 1933 issue of Film Pictorial magazine, Walt Disney addressed that very subject. “In private life, Mickey is married to Minnie. A lot of people have written to him asking this question, because sometimes he appears to be married to her in his films and other times still courting her. What it really amounts to is that Minnie is, for screen purposes, his leading lady. If the story calls for a romantic courtship, then Minnie is the girl; but when the story requires a married couple, then they appear as man and wife. In the studio we have decided that they are married already.”

We have plenty of evidence of the two being in love, as the museum continues the argument laid out by Walt,

“Over the years Minnie has often been the impetus of the story for Mickey; the goal or prize he’s fighting to obtain. This was quite literally the case in 1938’s Brave Little Tailor, when Mickey is mistakenly recruited as a giant killer. When the king offers Mickey millions in gold pazoozas as a reward, Mickey declines. It isn’t until Minnie offers her own hand in marriage, and subsequently decorates Mickey’s face with lipstick, that Mickey rethinks his position. ‘Whoopee! I’ll cut him down to my size.'”

The Mickey Mouse fandom has often speculated as to just what kind of relationship Mickey and Minnie share, but this spec of proof from Mickey Mouse’s creator, Walt Disney himself, sets the record straight. Mickey Mouse and Minnie Mouse are already married, but have the animated flexibility to appear together as newly dating, forever going steady, or any other requirement of the feature they are in. What’s very cool is that the previous voice actors for little Minnie Mouse (Disney Legend Russi Taylor) and Mickey Mouse (Wayne Allwine) were married in real life for years.

What do you make of Minnie and Mickey’s relationship? Leave us a comment on what you think!