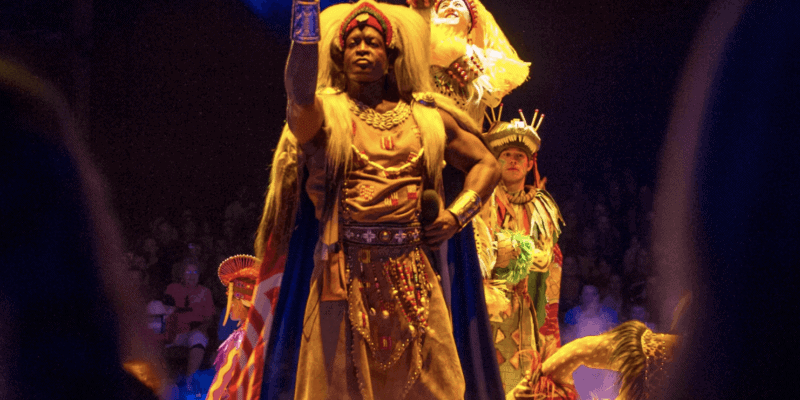 A performer at a popular Walt Disney World Resort entertainment show nearly caught a stage on fire at a recent production.

Disney World is home to many world-class attractions and entertainment shows that can be found at four different theme parks in the Magic Kingdom, EPCOT, Disney’s Hollywood Studios, and Disney’s Animal Kingdom.

From Beauty and the Beast Live On Stage to Indiana Jones Epic Stunt Spectacular at Disney’s Hollywood Studios to nighttime spectaculars like Disney Enchantment at Magic Kingdom and Harmonious at EPCOT, there is plenty to experience while visiting Disney World.

One of the most popular Disney Park shows to enjoy at Walt Disney World Resort is located in Disney’s Animal Kingdom in the Festival of the Lion King.

At a recent performance of the show, however, a Disney Cast Member nearly caught the stage on fire.

As you can see in the video, the performer accidentally loses control of their fire mechanism and it is flung onto the stage. They do an excellent job of recovering and picking it back up before anything happened.

Disney’s official description of Festival of the Lion King reads:

Join the inhabitants of the Pride Lands for a grand gala in honor of Simba, the lion cub who would be king.As the lights dim, hear the sounds of the African savanna. A kinetic kaleidoscope of color floods the stage as colossal puppets, extravagantly costumed dancers, and incredible stilt walkers dazzle the senses.During spectacular theatrics, you’ll relive all the classic songs from The Lion King, including “Hakuna Matata” and “Can You Feel the Love Tonight?” The spectacular finale includes a soaring rendition of “Circle of Life.”It’s a moving and immersive theatrical experience celebrating music that has touched generations of Disney fans—and a festival you’ll want to be part of again and again!

Have you ever seen a mishap like this while watching a Disney World show? Let us know in the comments!