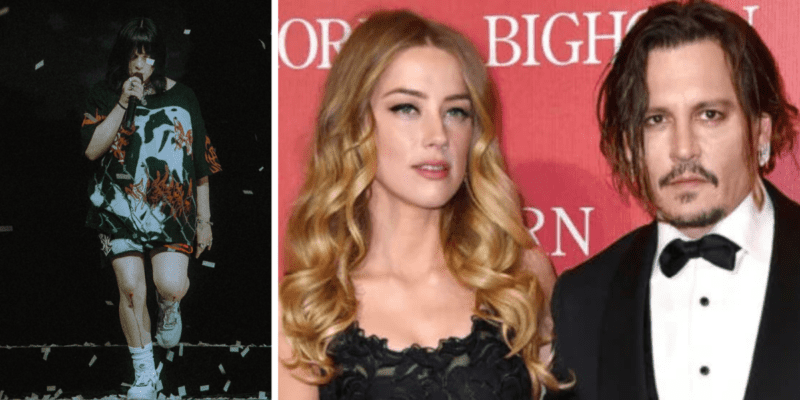 Everyone, including celebrities, took notice of the six-week Johnny Depp vs. Amber Heard trial.

The trial, which was live-streamed each day, pitted Johnny Depp against Amber Heard in a trial claiming defamation. In the end, Depp was awarded $15 million while Amber Heard, who is best known for her role in Aquaman (2018), was given $2 million in compensatory damages. Ms Heard has shared plans to appeal the ruling, meaning that the two could find themselves in court yet again, but the trial showed an overwhelming outpouring of support for Mr Depp.

As the trial has caused many celebrities to speak out in favor of Johnny Depp or Amber heard, another celebrity recently broke the silence with a new song.

“We haven’t played a new song live before it’s out since 2017 or 2018,” Song Writer and Singer Billie Eilish said to the audience at a concert this month. “This is one we just wrote and we just wanted to play for you.”

“What’s the point of anything / All of my friends are missing again / That’s what happens when you fall in love. The internet’s gone wild watching movie stars on trial / While they’re overturning Roe v. Wade,” Eilish sang.

Billie Eilish has had five songs hit the Billboard Top 100 in Adult Alternative Airplay, including “Bad Guy,” “My Future,” “Therefore I Am,” “Your Power” and “Everything I Wanted.” Eilish’s 2021 album Happier Than Ever just surpassed 3 billion streams on Spotify, it is her third consecutive project to achieve this feat.

Despite the June 1st verdict, Disney reportedly turned its back on Johnny Depp far before the trial started. Depp, who is most known for his role as Captain Jack Sparrow in the beloved Pirates of the Caribbean franchise, was confirmed to be replaced by Margot Robbie in the newest installment of the franchise and there are rumors that Dwayne Johnson could also replace Johnny Depp in another installment of Pirates of the Caribbean in the future.

In addition to losing his role as Captain Jack Sparrow in Pirates of the Caribbean, Johnny Depp was also replaced in the newest Fantastic Beasts movie by Madds Mikkelsen, which was released by Warner Bros. earlier this year.

While Amber Heard has faced backlash from many fans, her screentime was reportedly doubled in Aquaman 2 and she just reportedly inked a multi-million dollar deal for a “revenge tell-all book” highlighting her relationship with Johnny Depp, read more on it here.

What do you think of these new lyrics from Billie Eilish? Let us know in the comments!