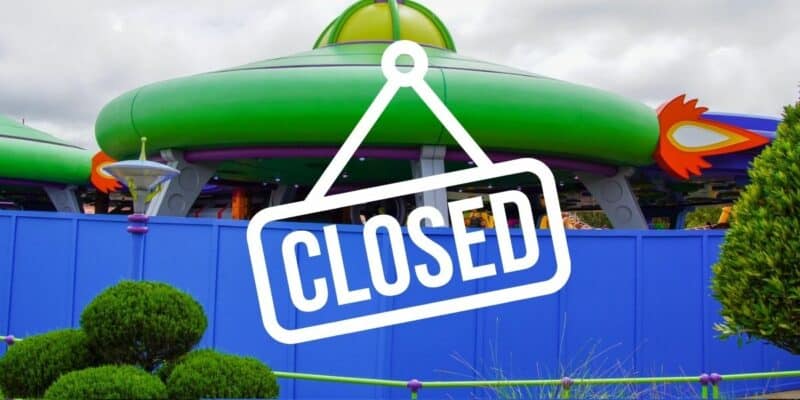 A few days ago we reported that Alien Swirling Saucers experienced longer than normal wait times as half of the ride was closed. Now, it seems as though that portion is undergoing an unexpected refurbishment as it is covered with construction walls and is still closed to Guests.

In 2018, Alien Swirling Saucers opened along with Toy Story Land at Disney’s Hollywood Studios. This attraction is a spinning, space-themed ride for all ages.

If you have never experienced this Hollywood Studios attraction, Disney describes Alien Swirling Saucers as:

Take an intergalactic spin with the adorable aliens from Toy Story.

The cutest extraterrestrials in the galaxy have landed, and they’re taking you for a ride. Power up the saucers for an interstellar romp through space, while futuristic tunes set the mood.

Space cadets of all ages may enjoy this gentle whirl through the sky above Toy Story Land.

Unfortunately for space cadets, part of the attraction is completely closed to Guests. Construction walls have been put up around the area, meaning only half of the ride is operating.

Bioreconstruct shared a photo of the construction walls to Twitter, along with the caption:

What’s interesting is this was never listed on Disney World’s refurbishment calendar so the refurbishment seems to have been unexpected.

Because half of Alien Swirling Saucers is closed for refurbishment, Guests will experience longer than average wait times for the attraction. Make sure you plan accordingly prior to visiting Disney’s Hollywood Studios.

While visiting Toy Story Land at Disney’s Hollywood Studios, Guests can also experience Slinky Dog Dash and Toy Story Mania. Or if you are looking for a quick bite to eat, check out Woody’s Lunch Box, which is a walk-up window restaurant serving breakfast, lunch and dinner!

Are you surprised to see Alien Swirling Saucers undergo a refurbishment? Let us know in the comments below.