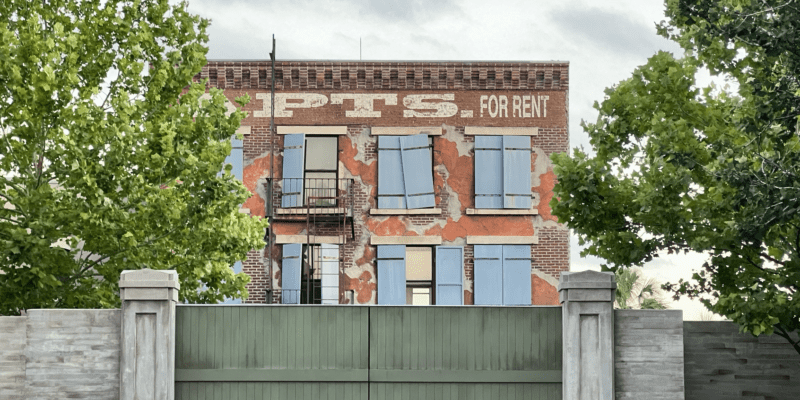 It is always sad to see something that Disney fans love to go away, but those moves are sometimes necessary to create and innovate at the Parks. At Disney’s Hollywood Studios, Guests had to say goodbye to the Streets of America in 2016 as Disney prepared to use that land to create Star Wars: Galaxy’s Edge.

The Streets of America was originally a land at Disney’s Hollywood Studios. As stated on Disney Wiki, “It was themed after street sets resembling both San Francisco and New York. Storefronts and shop windows were uniquely detailed, including nods to Disney related television and films, such as Mr. Gold’s Pawn Shop from the ABC TV Series Once Upon a Time, as well as an umbrella attached to a light pole as a nod to the 1952 movie, “Singin’ in the Rain”.”

Guests were also able to access all of The Muppets theming, including Muppet*Vision 3D, a 3-D film featuring Jim Henson’s Muppets from The Muppet Show. This attraction does remain in place to this day. What does not remain is the playground, Honey, I Shrunk the Kids: Movie Set Adventure, based on the 1989 Disney film Honey, I Shrunk the Kids, where young guests could play amongst oversized plants and toys. Lights, Motors, Action! Extreme Stunt Show was added in 2005 but also got the boot to make new space, as well as the Studio Backlot Tour.

Guests also used to be able to enjoy the millions of lights seasonally during the Osborne Family Spectacle of Dancing Lights. Those lights have since been donated to Give Kids the World Village for their Night of a Million Lights event that occurred over the past two years.

Although the Streets of America may be gone, there is still a section that remains!

Right next to Mama Melrose, the table service location in Muppet’s Courtyard, Guests can see that there are gates creating a dead end. Above that gate, however, are some run-down apartments which is a facade that made it through the Streets of America demolition! It is likely being used to block sightlines; however, as a fan of the land, I would like to think Disney left us a little piece of history to remember what used to be!

Do you miss the Streets of America at Disney’s Hollywood Studios?