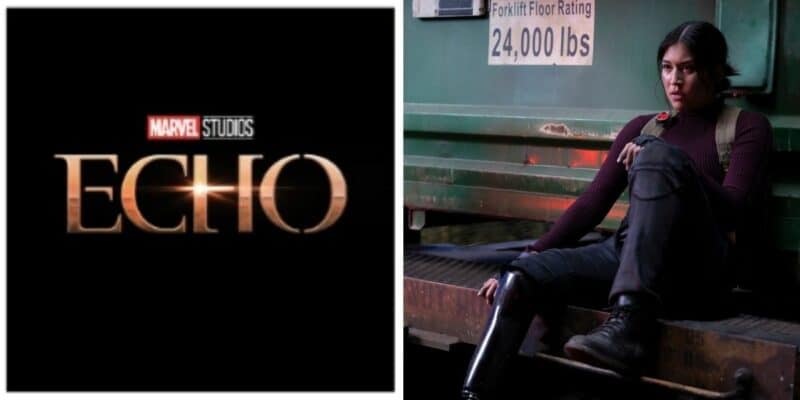 Returning from her appearances in Hawkeye, Alaqua Cox reprises her role as Maya Lopez for the Marvel Cinematic Universe. The offshoot series, entitled Echo, will cover the superhero’s exploits in her own series on Disney+. Disney and Marvel fans alike can expect to start screening the MCU television show sometime in 2023.

Production has begun in Atlanta, Georgia on Marvel Studios’ Echo, a series streaming exclusively on Disney+ in 2023. Alaqua Cox (Hawkeye) again stars as the unforgiving Maya Lopez, who made her MCU debut in 2021 in Marvel Studios’ Hawkeye.  Lopez is a deaf gang leader who was determined to make Ronin aka Clint Barton (Jeremy Renner) pay for his own vengeful deeds.

Echo will also feature Chaske Spencer, Tantoo Cardinal, Devery Jacobs, Cody Lightning, and Graham Greene, who have been cast in undisclosed roles. We’ve been given a first look at Cox’s Echo appearance, as Maya sits on the rear of an industrial vehicle, with what looks like a lot on her mind.

Streaming exclusively on Disney+ in 2023, the origin story of Echo revisits Maya Lopez, whose ruthless behavior in New York City catches up with her in her hometown. She must face her past, reconnect with her Native American roots and embrace the meaning of family and community if she ever hopes to move forward. Echo also stars Chaske Spencer (Wild Indian, The English), Tantoo Cardinal (Killers of the Flower Moon, Stumptown), Devery Jacobs (FX’s Reservation Dogs, American Gods) and Cody Lightning (Hey, Viktor!, Four Sheets to the Wind), with Graham Greene (1883, Goliath) and Zahn McClarnon (Dark Winds, FX’s Reservation Dogs).

Disney tells us through a press release that:

Disney+ is the dedicated streaming home for movies and shows from Disney, Pixar, Marvel, Star Wars, and National Geographic, along with The Simpsons and much more. In select international markets, it also includes the new general entertainment content brand, Star. The flagship direct-to-consumer streaming service from The Walt Disney Company, Disney+ is part of the Disney Media & Entertainment Distribution segment. The service offers commercial-free streaming alongside an ever-growing collection of exclusive originals, including feature-length films, documentaries, live-action and animated series, and short-form content. With unprecedented access to Disney’s long history of incredible film and television entertainment, Disney+ is also the exclusive streaming home for the newest releases from The Walt Disney Studios. Disney+ is available as a standalone streaming service or as part of The Disney Bundle that gives subscribers access to Disney+, Hulu, and ESPN+.

Will you be tuning in to Echo on Disney+? Leave us a comment below!

Comments Off on Production for Marvel Studios’ ‘ECHO’ Begins in Atlanta