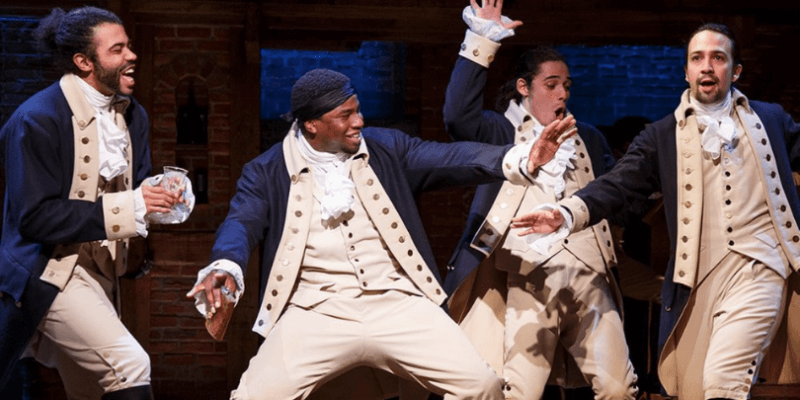 Broadway fans have loved Hamilton since 2015 when it opened on Broadway at the Richard Rodgers Theatre in New York City after a sold-out run off-Broadway at The Public Theater earlier that year. Written and led by Lin Manuel-Miranda, the musical brings hip-hop, jazz, and R&B to the story of America’s founding fathers and has spent the last few years touring across the world.

In 2020, Hamilton was introduced to a new audience when Disney+ released a cinematic recording of a performance by the original Broadway cast.

One of those cast members was Anthony Ramos, who originated the dual role of John Laurens and Philip Hamilton. Since his days on stage, Ramos has starred as Usnavi in the film adaptation of Lin Manuel-Miranda’s musical In the Heights (2021) and Ramon in A Star is Born (2018). Recently, Ramos announced he’s joining the cast of the Marvel Cinematic Universe’s new show, Ironheart.

Ramos is also known for his six-year-long relationship with Jasmine Cephas Jones, who originated the dual role of Peggy Schuyler and Maria Reynolds in Hamilton. Their relationship ended in 2021.

A few lucky Hamilton fans at Walt Disney World Resort this Sunday had the chance to meet Anthony Ramos while exploring EPCOT. @zach_88 posted two photos of himself posing with another member of his party and Ramos in the France pavilion at EPCOT’s World Showcase. Zach wrote:

Another Twitter user, @graveyardgage, found himself a bit starstruck when he parked next to Ramos in EPCOT’s parking lot:

Just uh randomly parked next to Anthony Ramos at epcot

Just uh randomly parked next to Anthony Ramos at epcot

Us making eye contact with Anthony Ramos as we were trying to figure out if it was really Anthony Ramos while he was standing next to our car at epcot: 👁👄👁

Us making eye contact with Anthony Ramos as we were trying to figure out if it was really Anthony Ramos while he was standing next to our car at epcot: 👁👄👁

Fans were delighted when the professional recording of the original Broadway cast of Hamilton dropped early on Disney+ amid the COVID-19 pandemic when many states were still locked down. Rarely are Broadway shows, notorious for illegal bootlegs, filmed professionally for the public eye. When they are, it’s rare to have every member of the original cast present, with the filming taking place so soon after the show opened at its original theater.

Then again, Hamilton, which received a record-breaking 16 Tony Award nominations and won 11, is a cultural rarity in its own right.

If you’re one of the few that hasn’t seen it, here’s Disney’s description of the sellout show:

“Hamilton” is the story of America then, told by America now. Featuring a score that blends hip-hop, jazz, R&B and Broadway, “Hamilton” has taken the story of American founding father Alexander Hamilton and created a revolutionary moment in theatre—a musical that has had a profound impact on culture, politics, and education. Filmed at The Richard Rodgers Theatre on Broadway in June of 2016, the film transports its audience into the world of the Broadway show in a uniquely intimate way.

Have you ever run into a celebrity at a Disney Park? How did it go? Let us know in the comments!

Comments Off on Hamilton Star SPOTTED at EPCOT!