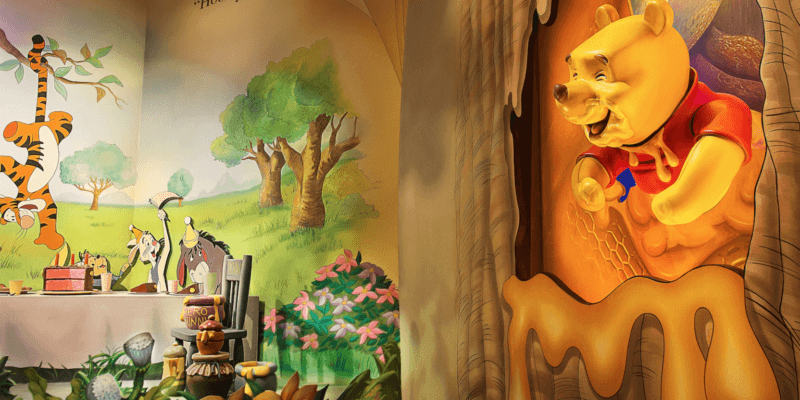 One Disney World Guest dared to do the extreme, and now, fans are worried for the safety of the brave soul.

Related: Disney Immediately Blocks Passholders Out of Parks Over Next 2 Months

The Disney Parks are known for many things but possibly the most famous aspect of the Parks are the insane crowds and long lines. As more and more attractions make their way into the Resort, crowds continue to pack in like sardines. Because of this, Disney now makes their queues as interactive and enjoyable as possible.

We have seen this with rides like Flight of Passage and Millenium Falcon: Smuggler’s RUn where the lines are expansive and filled with details, decorations, and even animatronics.

The queue for The Many Adventures of Winnie the Pooh is a very interactive one, to say the least, Filled with things to grab your attention, Guests of all ages will surely find something to play with while they wait. One of the most popular and notable elements of the queue is a touchscreen wall which attracts hundreds of slaps and smacks by Guests on the daily.

This wall appears to be made of honey and touching it can (slightly) change the shape and direction of the digital honey that slides down. It is certainly not the most high-tech piece of equipment in the Parks but it sure is fun.

In a bizarre showcase of bravery (or whatever you want to call it), one Guest dared to do what no one else has done: lick the infamous honey wall. Yes, you read that right. See the full video of this heinous act below shared in a tweet from Brad Starrlord (@braddrinks:

Just so you know, this is the start of another 6 months of quarantine

Just so you know, this is the start of another 6 months of quarantine https://t.co/5aljQX290C pic.twitter.com/QYf1dsdYKy

This act shocked us to our core as well as fans who saw the tweet online, with several joking about needing a “biohazard suit”. Deborah Bowen (@DisneyDeborah) commented:

I am both disgusted and flustered

I am both disgusted and flustered

A test of your immune system.

A test of your immune system.

We would under no circumstances recommend you try this as it is unsafe and just generally really gross. This is especially shocking considering the world is still dealing with the COVID-19 pandemic.

Licking the wall might also alter the homing signal for the ride, and in the words of Dr. Seeker, “that’s not good”. To put it simply, don’t lick a touchscreen wall at one of the most popular theme Parks in the world. Of course, we don’t think that it would affect the ride, however, it can affect your fay as the Guest after you end up very ill!

More on the attraction

What shocking things have you seen Guests do at Disney?