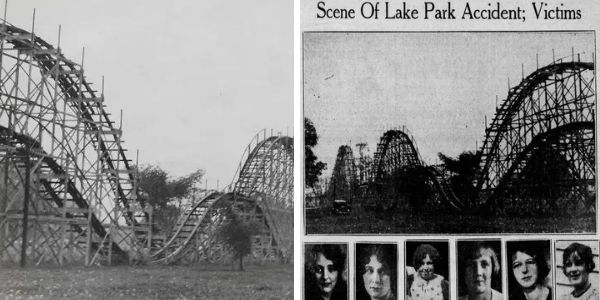 Rollercoaster safety is a top priority for many theme parks, as is overall Guest safety. Of course, Guests want to experience terrifying thrills, high speeds, fast drops, and more — but the only reason all of these death-defying stunts are fun is due to the fact that riders know that they are safe in the hands of the attraction and that it was made to keep them alive.

Sometimes, things can go wrong, however, and accidents will occur. On May 12, 1930 The Radio Streak coaster at Springfield Lake Park took a nearly fatal crash, and now, survivors are speaking out on the horrifying experience. The Akron Beacon Journal spoke out on the story, stating:

The Radio Streak, a top attraction at the park, was a high-speed thriller with three large hills, four smaller dips and two sharp curves. More than 50 feet tall, the coaster featured a three-car train that barreled along at more than 60 mph.

John F. Johnson was 28 at the time, and when he went to the Park, he remembered not wanting to ride the wooden coaster. Johnson had been a witness in May 1924 when a woman fell to her death from a coaster at Summit Beach Park, so it is no surprise as to why he had his reservations.

Johnson’s wife called him a coward, but he noted that he remained on the ground. The coaster filled 23 out of 24 seats, as Johnson refused to board. Unlike attractions today, the ride operator had to actually slow the train down before it returned to the loading dock. The Radio Streak required a park worker to apply brakes when the train got within 40 feet of the platform and then to hit the brakes again at the platform to bring the cars to a stop.

Lawrence Burke was 30 at the time, and had been operating the ride for two days. He was not at his station at the time that this slow-down needed to occur.

“As the car came rocking around the curve on the home stretch of the ride, spectators noticed that the employee assigned to apply the brakes was not at the controls. Several of them thought that the train would turn and go out the other way. Panic struck them when they saw the operator make a dash for the switch. He was too late.”

The coaster crashed at 60 mph. The train plowed into a guardrail and then tossed out the riders from the impact. Johnson went to rescue his wife, while also punching Burke in the face. They went directly to the the Akron hospital.

Below are all of the injuries that occurred:

• Donna Myers, 22, education major at the University of Akron. Cuts, bruises and a concussion.

Miraculously, no one was killed in the crash, but some of those hurt were bedridden for months and some suffered permanent injuries.

The Park would reopen the following year without the coaster, and would then go bankrupt a few years later. Now, Ohio is still loading Guests into coasters with Cedar Point being a massive tourist destination.

According to a report from Click Orlando, the unnamed 14-year-old boy was riding ICON Park’s newest attraction, Orlando FreeFall, when he somehow fell to his death. They say:

A 14-year-old has died after falling from a thrill ride in Orlando, Orange County deputies say.

According to the sheriff’s office, deputies responded to 911 calls for an emergency at the Orlando Free Fall at Icon Park at 11:12 p.m. after witnesses reported seeing a person fall from the ride to the ground.

The teenager was taken to the hospital where he died from his injuries, deputies said.

The sheriff’s office is investigating the incident.

An operating manual from the Orlando FreeFall states that the maximum rider weight for the attraction was just over 286 pounds. Tyre Sampson was 6-foot-5 and weighed over 350 pounds. An update in the investigation revealed that the sensors on the attraction seat had been manually adjusted, resulting in dangerous conditions.