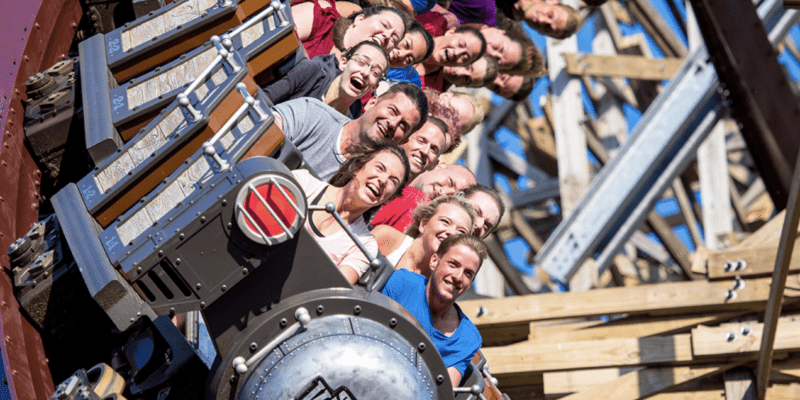 Yesterday, Steel Vengeance at Cedar Point was stuck on the lift hill. According to Guests, shortly after the ride was moving, the attraction shut down for the night.

Cedar Point has a ton of attractions Guests love to ride like Blue Streak, Corkscrew, Gate Keeper, Gemini, Iron Dragon, Maverick, Millenium Force, and more. Yesterday, it seems that Steel Vengeance underwent some difficulties. CP Rundown (@CPRundown) posted a video of the coaster being stuck on the lift hill.

They got it running not long after this…but still ruined the night for alot of guests as nobody else was allowed on. STEVE just started running on Thursday for the first time this season, it did not run at all the first 4 days the park was open..Not a good sign
#CedarPoint 2022

They got it running not long after this…but still ruined the night for alot of guests as nobody else was allowed on. STEVE just started running on Thursday for the first time this season, it did not run at all the first 4 days the park was open..Not a good sign#CedarPoint 2022 pic.twitter.com/9Kcp6IYkIw

Other Guests responded to the Tweet stating that this is a common issue for the coaster, although they do not understand why. Luckily, no Guests were harmed due to the mechanical issue which was quickly resolved. But, as we noted, it seems other Guests were not able to experience the coaster that day.

Steel Vengeance is a wood-steel hybrid coaster that is taller and faster than any of its kind. It stands at 205 feet tall, reaches speeds up to 74 miles per hour and features a 90-degree drop.

Cedar Point describes the coaster as:

Outlaws Blackjack, Chess and Digger have returned to Frontier Town to reclaim what had been taken by Maverick years before. And they came back with a vengeance. Their creation was so bold that it created a new category of roller coaster: the hyper-hybrid. Steel Vengeance opened as an unmatched world-record breaker with some serious stats: 205 feet tall, 74 miles per hour, longest hybrid coaster in the world at 5,740 feet and almost 30 seconds of airtime – the most airtime on ANY roller coaster in the world – along with twists, turns and close calls during the 2 minute, 30 second ride. Drop 200 feet at 90 degrees and topple through 4 head-over-boots inversions through wood, steel and mayhem. Saddle up for the ride of your life and try to keep your wits about you. Cedar Point’s roller coaster legacy continues…Frontier Town will never be the same.

It seems the coaster is still closed today.

Cedar Point in Ohio, one of the biggest thrill Parks out there, underwent quite the legal battle. On August 15, there was an accident at Cedar Point (owned by Cedar Fair) that involved the 420-foot (128-meter) tall Top Thrill Dragster roller coaster, according to ABC News. The coaster, which opened in 2003, launches riders on a straightaway at 120 mph (193 kph) before it climbs a hill and then comes back down. Lasting only 20 seconds, the ride is highly thrilling for Guests but things went wrong for one rider who was allegedly struck by a metal object while riding. The Guest was moved from one hospital to another, but the severity of the injury was not announced by ABC, however, other reports noted the woman was left with brain damage.

Cedar Point has seen coaster incidents in the past. On June 26, 2019, two trains at Cedar Point bumped on the Valravn roller coaster. As recently as 2015, a man was killed by Cedar Point’s Rapture roller coaster. In July of 2004, metal debris was expelled forcefully from the launch cable of Cedar Point’s Top Thrill Dragster ride as the coaster was deployed. Four passers-by were struck by the high-speed metallic scrap, though all survived. Two were treated on-site and the others brought to a nearby hospital, to name a few tragic events.

We recently covered that reports from WTOL uncovered 27 allegations of sexual assault by Team Members at Cedar Point in Sandusky, Ohio.

Many Cedar Point Team Members live at a nearby apartment complex during the theme park’s season and this location is where the vast majority of alleged incidents unfolded.

“I don’t know how many hundreds of employees live in the employee housing. I don’t know how many they have who are part-time living there or full-time living there. I know there’s a larger population that takes over those housing areas during the season, so there’s a lot of people and a small place. But that is a larger number (of assaults),” Sandusky Police Chief Jared Oliver said. “I would like to see a smaller number than that.”

The report, which was released last week, noted that the number may be much higher because not all incidents are reported and now an updated report has come to light, noting more allegations of sexual assault by former employees of the theme park.

According to the updates, three former HR employees claim lax controls on Cedar Point’s hiring process threatened the safety of the staff and the public. Read more here.

Have you ever visited Cedar Point? Let us know in the comments below!