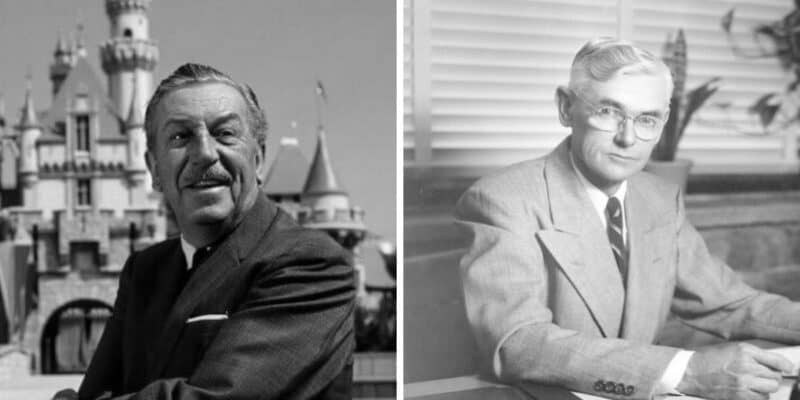 Walt Disney owes a lot to Walter Knott. Though Disney’s Theme Parks, characters and attractions have become some of the most popular in the world, Knott’s many creations inspired Disney to become great. The unique history of Knott’s Berry Farm peeks through even today in the four lands of the Park, and when you read what Walt Disney “stole” from Knott, you’ll be shocked! The intellectual property idea is rampant in Disney Parks today!

Many folks don’t know that Water Knott had the “first” Theme Park, located in Southern California. Attempting to entertain Guests waiting to dine in his wife’s famous fried chicken restaurant, Mrs. Knott’s Chicken Dinner Restaurant, Walter Knott re-created his beloved mine town as Calico Ghost Town. The old west Ghost Town was free for Cordelia Knott’s dinner guests to wander as they waited for a table, because even the 350 seat restaurant wasn’t big enough to seat the hungry crowds, hour after hour. They could look in the buildings, ride in a stagecoach (arguably the first “attraction” in a theme park), and enjoy themselves.

In the 1960s, Knott began charging 25 cents for admission because the Ghost Town was starting to become more popular than the restaurant! Lines formed as interests expanded until the Ghost Town amusement park was the main attraction. Years passed, and the theme park grew as Walter Knott purchased a full-size train. Like Disney, Knott had a huge interest in trains, and he invited Walt to see his auction purchase. Walt loved it, and while he was visiting the other side of Orange County, decided to enjoy Knott’s Theme Park.

Walt Disney wandered around the Park attempting to get some ideas to bring back home. He saw the Calico Mine ride’s short wait (and with his love for trains) hopped into the line. But what Walt didn’t know was Walter Knott had hidden the line. Behind the marquee for the Calico Mine Ride, a snaking queue was hidden amongst the rocks, cacti, and decor. Walt was flabbergasted.

It was genius. Lines are pretty ugly and repel Guests approaching the attraction. But once you’ve hidden the queue, there’s an opportunity for storytelling, air-conditioning, and a more attractive inner Park appearance. We all know that Disneyland opened in 1955 with outdoor queues for Peter Pan, Storybook Canal, and Jungle Cruise, but after about 1958 each of Walt Disney’s rides had a hidden queue. This is evident at attractions like Haunted Mansion, Pirates of the Caribbean, and Adventures of Indiana Jones at Disneyland Park.

Walt Disney World, which opened in 1971, followed suit with perfectly hidden queues nearly everywhere they could be housed, such as “it’s a small world,” Seven Dwarfs Mine Train, Dumbo the Flying Elephant, and newer Enchanted Forest Fantasyland attractions like Journey of the Little Mermaid and Enchanted Tales with Belle. The “storytelling” queues dazzle Guests with pre-show rooms like Rise of the Resistance, Hollywood Tower of Terror, and Avatar Flight of Passage. Two to three rooms after the bulk of the queue allow Disney Guests to remain in line while being entertained and gleaning parts of the Imagineer’s stories.

While Disney wasn’t able to acquire Knott’s Berry Farm in the 1990s when it was sold by the family, it was a serious consideration, as the family-friendly-fun theme park is located in close proximity to Disneyland, in Orange County, California. Despite this, Disney’s Theme Parks have continued to perfect the hidden queue concept invented by Walter Knott.

Do you enjoy these hidden queue marvels? Leave us a comment below!