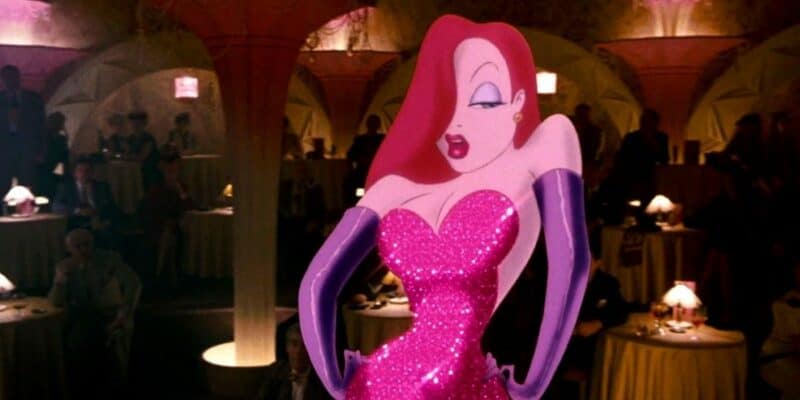 Disney’s Dress Shop has been creating fun, character-themed outfits for a few years now. Fitting right in with the Dapper Day crowd, these dressed have often taken a vintage silhouette, with swing skirts, pencil looks, and plenty of retro accessories to boot. The newest addition to The Dress Shop’s warehouse is a Jessica Rabbit Dress. The red look is leaving Guests feeling the way cartoon character Jessica is drawn… bad.

Inspired by the 1988 film, Who Framed Roger Rabbit, this new red number takes on the character of Roger’s wife, Jessica. Drawn “bad,” Jessica is walking sex appeal, with exaggerated body curves, stiletto heels, and luscious red lips. Her character is heroic and loyal, all while inadvertently luring the wrong attention.

Jessica’s red dress is a staple of her appearance, with figure hugging dress curves, purple makeup, and a slit up to there. Disney’s Dress Shop version is a far cry from the animated classic, and fans agree.

Disney’s dress is a knee-length version with a small slit, forgoing Jessica’s floor-length number. Instead of a strapless look (which could be hard to market to all body types) they opted for a pleated shoulder and mock sweetheart neckline. The dress is metallic-pocked velvet instead of the glittering sequins Jessica exudes onstage. We’re not sure at this time if purple gloves are offered, but you can see the purple ears with a pink bow atop the mannequin. shopDisney’s description of the dress is,

“You’ll be the talk of Toontown when wearing this figure-hugging dress inspired by Jessica Rabbit. Befitting the curvaceous character from Who Framed Roger Rabbit, the sparkling stretch knit velvet has pleated detailing, a slit hem, and an enamel cloisonné Jessica zip pull.”

Created especially for Walt Disney World Resort and Disneyland Resort, the dress is obviously available online, for the rich price of $128.00. But when you see the dress on a form, or anyone but the shopDisney model, it’s lacking in structure or aesthetic in general. Disney_Hype_Beast_80, who often gives great takes on Disney merchandise, shared the new dress onsite at Disney Springs. Many of their followers weighed in with dismay, commenting on her removal from the ride, how the dress doesn’t suggest Jessica’s character, and more. The caption reads,

“Here is a look at a new Jessica Rabbit dress available over at the Dress Shop in Downtown Disney. Retail $128”

Likewise, a post from @4DisneyFashion asks followers to comment on the newest release. While the photo below is only one in the carousel, it’s certainly sad the way it’s been displayed on the mannequin. Disney and Roger Rabbit fans will need to take this dress in with some TLC in order for it to convey the Jessica Rabbit vibe they want.

While @4DisneyFashion admittedly doesn’t love the dress, neither do their followers. These comments from users (who would follow this account for Disney fashion) offer scathing remarks on the design, including,

“@4disneyfashion should have a contest to see who can actually make this look good,

Not worth the price tag…

This is just BAD! I love the lines of Jessica Rabbit, and I would have loved to see that incorporated into a dress. I feel like they didn’t even try. It’s a NO from me.

and, I think that’s lazy designing”

“The new Jessica Rabbit dress is at The Dress Shop in Disney Springs, and…I don’t love it. 🤔 What are your thoughts on this one? Dress: $128”

The nice details on the Jessica Rabbit dress, sadly don’t make up for the horrible design. The inner lining has a Jessica cartoon with her signature, and small starbursts.

The very small slit, which doesn’t line up with Jessica’s original look, is sewn nicely, but is too small and lackluster.

If you were going to Disneybound Jessica Rabbit, would you be considering this Disney Dress Shop look? Leave us a comment below.