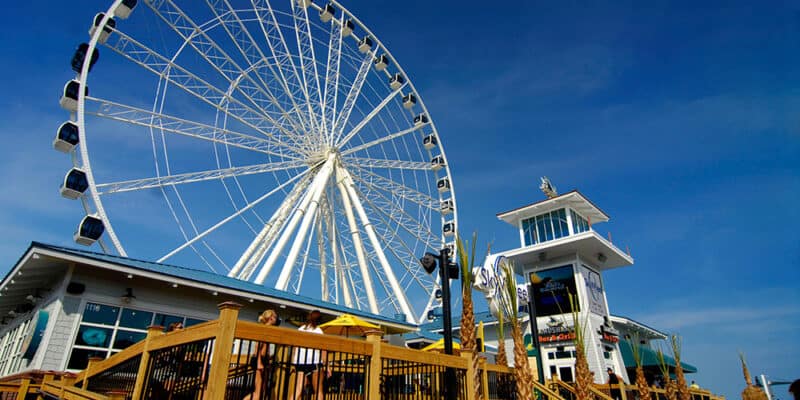 There are plenty of options when choosing a vacation destination to take into account.

Whether you’re taking in historic sights, going for a hike on trails, or heading to one of many theme parks around the country including places like Walt Disney World Resort, Disneyland Resort, Universal Orlando Resort, Universal Studios Hollywood, Busch Gardens, SeaWorld, Cedar Fair properties, or Six Flags, you’re sure to have a great time.

One of the most popular summer trips for families to take is down to the beach.

Myrtle Beach, located in Horry County in South Carolina, is a popular destination for tourists all around the country. The area is known not just for having the ocean, but also for possessing many attractions such as restaurants, entertainment, and so much more.

Recently, one of the most iconic attractions at Myrtle Beach caught fire.

VIDEO: The SkyWheel Myrtle Beach will be temporarily closed after a small fire Thursday night.

VIDEO: The SkyWheel Myrtle Beach will be temporarily closed after a small fire Thursday nighthttps://t.co/dvREd2blLw

The SkyWheel is located right on the beach in what is known as The Boardwalk. The area is home to many tourist attractions with the SkyWheel being the most massive and iconic.

Myrtle Beach Police and the Myrtle Beach Fire Department responded quickly and were able to get the fire under control with no injuries.

SkyWheel Myrtle Beach shared the following statement after the incident:

“Overnight, after SkyWheel was closed, there was a small fire on property damaging part of the loading deck and a nearby gondola. Thankfully no SkyWheel crew were on-site at the time, and there were no injuries.

SkyWheel will remain closed tonday and until we are able to make the necessary repairs and complete an inspection to ensure the safety of our guests and crew. LandShark Bar and Grill will be open as well as the LandShark SurfShack. Stay tuned to our website and social media pages for updates on when SkyWheel reopens.

SkyWheel would like to thank the Myrtle Beach Fire Department and Myrtle Beach Police Department for their rapid response. SkyWheel is actively assisting MBFD in their investigation into the cause of the fire.”

This isn’t the first fire to be reported at a major tourist attraction recently. Back in December, a fire truck was rushed down Main Street, U.S.A. at Magic Kingdom in Walt Disney World Resort after a fire. A Disney attraction also caught fire in March following a potential firework miscue.

What do you think of this incident at SkyWheel Myrtle Beach? Let us know in the comments!