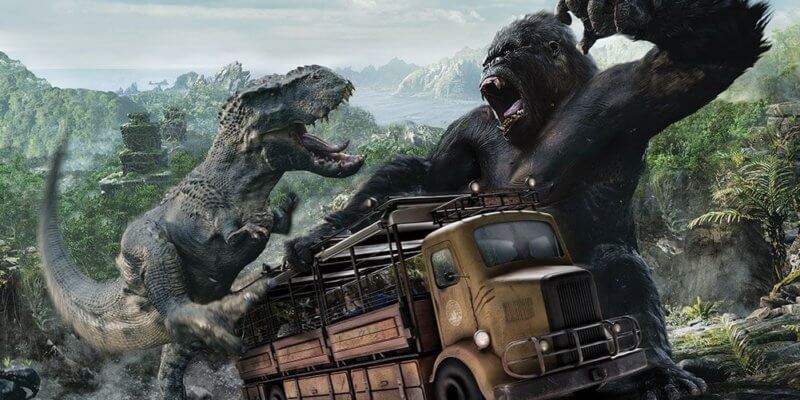 At Universal Orlando Resort, there are a few attractions that are currently under refurbishment, but it seems that there should be a few more that need a little TLC.

In the Florida weather, it is easy for different areas of any theme park to end up discolored or damaged, due to storms or the hot sun beating down on it all day. Because of this, a lot of maintenance and work is often put into keeping Parks like Universal Orlando Resort and Walt Disney World Resort looking fresh and brand-new.

At Universal Orlando Resort, we finally just saw Poseidon’s Fury reopen at Islands of Adventure after a very lengthy closure. Now, it seems Skull Island: Reign of Kong, which can also be found in the same Park, may be in need of a few touch-ups. Bioreconstruct (@bioreconstruct) snagged some photos of the mountain landscape on the attraction, which creates a very immersive environment for the ride. That being said, we can see that the mountain range is very faded with green coloring running down the exterior.

This may be a small cosmetic change that is needed, but considering this effect is such a successful one when it comes to the ride’s sightlines, it is one with fixing.

His Rule Has Begun.
Brave the dangers of a mysterious island where few have dared to venture. On your treacherous jungle expedition, prehistoric predators and vile creatures attack from all sides. Just as all seems lost, the most colossal ape ever to walk the Earth—King Kong—hurls himself between you and certain doom. Is he your hero or the ultimate foe?

The ride often receives some flack due to its 3-D nature, however, the massive animatronic of King Kong and the immersive queue and exterior often allow Guests to find a lot of positive aspects about the attraction as well.

Are you a fan of Skull Island: Reign of Kong? Let us know in the comments below.